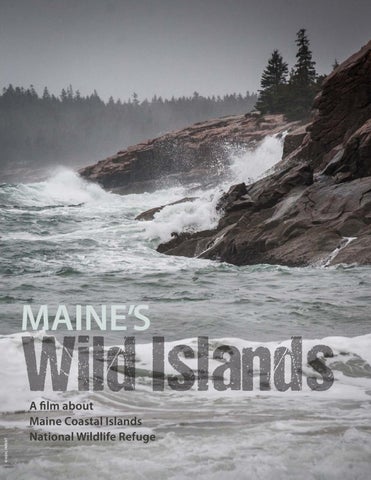 ixty-two islands make up the Maine Coastal Islands National Wildlife Refuge, a 200 mile-long chain of wild islands and mainland areas running from Smuttynose Island near the New Hampshire border to Spectacle Island near the Canadian border. The islands are like a string of pearls, beautiful to behold, but also critical wildlife habitat: rookeries for gray seals and nesting grounds for arctic, common and roseate terns, Atlantic puffins, razorbills, black guillemots, Leach’s storm-petrels, great cormorants, common eiders and many other species. This bluechip, feature-length documentary celebrates these wild islands, for their natural beauty, their environmental importance and their economic contribution to the people of Maine. Maine’s islands are a place where the earth, the sea, and the sky are mashed together in constantly unfolding frames of beauty. In 1884 the painter, Thomas Cole, founder of the Hudson River School, whose members celebrated the majestic natural beauty of America, wrote, “The whole coast along here is iron bound — threatening crags, and dark caverns in which the sea thunders.” Cole came to Mount Desert Island, and was followed by many others: Winslow Homer to Prout’s Neck in 1883; Robert Henri and his protégé Rockwell Kent to Monhegan in the 1950’s; N.C., Andrew, and Jamie Wyeth to the islands off Port Clyde. Many others came and still come to paint, draw and photograph the beauty of the islands. It is this land and seascape that our award winning team of world-class cinematographers will capture in stunning 5K imagery.

in the Cross Hairs

“This project is a work of passion and commitment for all of us on the team,” says producer Steve Thomas. “We work all over the world and we live here in Maine. We‘re drawn to the beauty and wildness, and to witness every day the hand of the Creator. We understand the threats, and we understand the importance of preserving the wild islands in a time when preservation is in the cross hairs.”

Berez, “until photographers and filmmakers brought home images of the surreal beauty and abundant wildlife, the Arctic was a blank space on our maps. It was the pictures that made us care; pictures identified it, characterized it and named it. That’s our aim for the refuge, we want Mainers and people “from away” to protect this refuge as their own, to make them an inheritance for their children.”

“I see an analogy with the Arctic,” says director David

The Stories Beginning with the first sunrise of spring, shot from the lighthouse

on remote Matinicus Rock, this film will trace the seasons through the islands, capturing the severe beauty, the extreme weather, and the tranquil seascapes to illustrate the story of the life and migration of the sea birds and wildlife that depend on the islands. We’ll shoot in all seasons, in all weather — underwater, on land, and from the air — to capture the early summer fog banks, the late summer starscapes, and the lashing winds of an offshore blizzard. We’ll tell our story from three perspectives: ­science; “working waterfront;” and history.

e’ll follow Refuge biologists and volunteers banding saw-whet owls on Petit Manan Point, join in a nesting seabird census, and explore the underwater world of rockweed as a fish nursery. We’ll get to know the birds species inhabiting the Wild Islands, as they nest, feed and reproduce. We’ll learn how humans have altered the seabird habitat both to the negative and the positive. Working in the field we’ll come to understand why maintaining all wild spaces is ecologically critical and why preserving the Maine Coastal Islands Wildlife Refuge in particular is absolutely critical. The Wild Islands are part of a big, complex, and unique ocean system, the Gulf of Maine. Warming and becoming more acidic faster than almost any other ocean region on the planet, the Gulf faces some daunting challenges. Accompanying the scientists as they study the Gulf from their research vessels, we’ll learn how the islands and their wildlife are facing this challenge. We’ll learn about the interaction of the top and bottom currents, the wind and weather patterns that comprise the physical and biological dynamics of the Gulf.

he Mainers who work on the water often come from many generations of watermen. Lobstermen, commercial fisherman, loggers, quarrymen, clammers, seaweed harvesters and others often have the perspective of having learned from their fathers, grandfathers and great-grandfathers. Many of the islands in Maine Coastal Islands National Wildlife Refuge were “working islands” long before being placed into trust and several still have mixed-use activities today. It’s important to acknowledge that these Refuge islands have rarely been pristine and untouched. Although off limits during the nesting seasons, the islands of the Refuge are very much part of the “working waterfront” that has defined coastal Maine for generations.

he islands have a rich history, which we’ll explore through newspaper stories, literary works, diaries of lighthouse keepers, archival images and even old film reels. These stories take us into a different and often romanticized time, of summer fish camps, manned light houses whose hand-tended lamps were critical to mariners, granite quarries where the elegant columns for the New York and Philadelphia libraries were quarried and carved, and even bombing practice targets for the pilots of WWII. Where bird populations are concerned, the Refuge islands have had a very dynamic 19th and 20th century due to the waxing and waning of distinct commercial “feather and egg” interests. What becomes clear when reading the historical record is that the quiet refuge of today was anything but. In their heyday, they were filled with the booms of dynamite, the crack of shotguns and the blasts of ships’ horns. And finally, few of the wild islands would have remained so without the gifts of land by private families, which now comprise the essential building blocks of the Maine Coastal Islands National Wildlife Refuge. Most surprising was the

Mague family’s bargain sale of nearly the whole Petit Manan peninsula in Steuben. The Magues were not rich, and they would have profited handsomely had they sold their 2,000 acre property on the open market. Yet they knew in their bones that if they did not preserve their beloved peninsula, it would be lost. Inspired by the Magues, the Thomas Cabot family donated six islands in Machias Bay. The Coast Guard and the US Navy donated numerous islands as they became unneeded for official business, and the Island Institute devised the “Maine Lights Program” which transferred surplus lighthouses to the Refuge and others. Donations of land to complement the Refuge continue to this day. All these stories will be intercut to create the big arc of our narrative. Ken Burns told the story of the National Parks. We’ll tell the story of the Maine Coastal Islands Wildlife Refuge—Maine’s Wild Islands.

As the tide came, the sea rose higher and higher, till the only endurable places were the light-towers. If they stood we were saved, otherwise our fate was only too certain.

he production phase will take about eighteen months, using two types of teams. We’ll use a “fast attack” team with a very light footprint, ready to mobilize on short notice. Trailering our own boats and working from our base in mid-coast Maine, we’ll be prepared to capture incoming weather, transient migrations, and other shortduration natural phenomena. This team will also shoot “postcards” on many of the remote Refuge islands, so we get a picture of the whole network. We’ll also plan a series of more comprehensive shoots for the featured islands and stories, using bigger boats, two or three cameras, an underwater cinematographer, and an aerial capture crew.

ocumentaries can no longer exist in a vacuum. The filmmaker’s task of developing audiences is a long-term process that begins from the moment of commitment to a film’s concept. A social media outreach campaign both shares the working process and content of the finished film, while at the same time building an audience to watch the final product. We shoot the film, show the process in social media, and screen finished scenes, all before the film is completed. A successful outreach campaign supports and strengthens the film’s distribution, whether broadcast television, a film festival run, or selected theater screenings with Q&amp;A with filmmakers and scientists. The goal, in all cases, is to locate audiences, create enduring connection, and ultimately, to communicate our call to action. A successful social media campaign builds loyalty and active participation, so our budget includes a social media component.

he objective of our film is to build awareness of this unique treasure and its value, and to encourage viewers to protect the refuge. To that end, we’re determined to re-purpose the film to expand the audience way beyond a traditional broadcast audience. For example, we will submit Maine’s Wild Islands to film festivals; schedule the film at a series of screenings in movie theaters with a post viewing Q&amp;A; and sponsor a lecture series in libraries across the state featuring refuge biologists, Maine historians or others connected to the film. We also will cut the film into a series of chapters or shorts that we’ll make available as educational resources for teachers. We’ll make the film or its components available to stream on underwriters’ websites and use it to roll out a robust social media campaign. Our goal is not to simply make a film, we want to make an impact. 207-594-5846 | WWW.MAINESWILDISLANDS.COM |

David Berez, Director P. David Berez is a Producer/Director/Editor of more than three hundred video, film and multimedia projects for broadcast, corporate and non-profit clients. He is the senior producer and owner of Post Office Editorial, a boutique production facility in Camden as well as a principal in Penobscot Bay Media, located in Rockland, Maine. He directed Moving Stories/Moving Pictures, a multimedia history of orthopaedic surgery which won a coveted CLIO award. David directed and edited Wounded in Action, a nationally broadcast PBS documentary about battlefield surgeons in World War II that is part of the permanent collection at the D-Day museum in New Orleans. From 19952001, David and his company post-produced, edited, and color-corrected more than forty hours of Anyplace Wild, a nationally syndicated outdoor adventure series on PBS. David has produced and filmed from the underwater canyons of Bloody Bay Wall in the Little Cayman Islands to a combat support hospital in Balad, Iraq. His work has appeared on PBS, The Discovery Channel, Animal ­Planet and in numerous board rooms across the country.