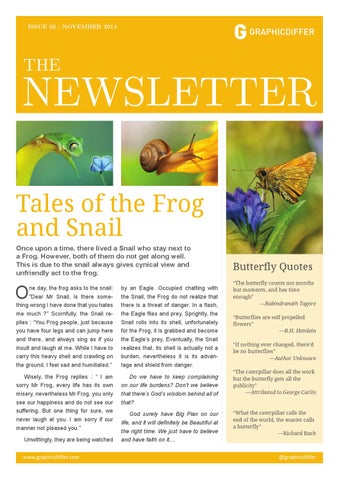 NEWSLETTER Tales of the Frog and Snail Once upon a time, there lived a Snail who stay next to a Frog. However, both of them do not get along well. This is due to the snail always gives cynical view and unfriendly act to the frog.

ne day, the frog asks to the snail: “Dear Mr Snail, is there something wrong I have done that you hates me much ?” Scornfully, the Snail replies : “You Frog people, just because you have four legs and can jump here and there, and always sing as if you insult and laugh at me. While I have to carry this heavy shell and crawling on the ground. I feel sad and humiliated.”

by an Eagle. Occupied chatting with the Snail, the Frog do not realize that there is a threat of danger. In a flash, the Eagle flies and prey. Sprightly, the Snail rolls into its shell, unfortunately for the Frog, it is grabbed and become the Eagle’s prey. Eventually, the Snail realizes that, its shell is actually not a burden, nevertheless it is its advantage and shield from danger.

Wisely, the Frog replies : “ I am sorry Mr Frog, every life has its own misery, nevertheless Mr Frog, you only see our happiness and do not see our suffering. But one thing for sure, we never laugh at you. I am sorry if our manner not pleased you.”

Do we have to keep complaining on our life burdens? Don’t we believe that there’s God’s wisdom behind all of that?

God surely have Big Plan on our life, and it will definitely be Beautiful at the right time. We just have to believe and have faith on it....

Butterfly Quotes “The butterfly counts not months but moments, and has time enough” ––Rabindranath Tagore “Butterflies are self propelled flowers” ––R.H. Heinlein “If nothing ever changed, there’d be no butterflies” ––Author Unknown “The caterpillar does all the work but the butterfly gets all the publicity” ­––Attributed to George Carlin

“What the caterpillar calls the end of the world, the master calls a butterfly” ––Richard Bach

hu Yingtai is a beautiful and intelligent young woman, the ninth child and only daughter of the wealthy Zhu family of Shangyu, Zhejiang. Although traditions of that era discourage females from going to school, Zhu manages to convince her father to allow her to attend classes in disguise as a young man. During her journey to Hangzhou, she meets Liang Shanbo, a scholar from Kuaiji (present-day Shaoxing). They chat and feel a strong affinity for each other at their first meeting. Hence, they gather some soil as incense and take an oath of fraternity in the pavilion of a thatched bridge. They study together for the next three years in school and Zhu gradually falls in love with Liang. Although Liang equals Zhu in their studies, he is still a bookworm and fails to notice the feminine characteristics exhibited by his classmate. One day, Zhu receives a letter from her father, asking her to return home as soon as possible. Zhu has no choice but to pack her belongings immediate2

ly and bid Liang farewell. However, in her heart, she has already confessed her love for Liang and is determined to be with him for all eternity. Before her departure, she reveals her true identity to the headmaster’s wife and requests her to hand over a jade pendant to Liang as a betrothal gift. Liang accompanies his “sworn brother” for 18 miles to see her off. During the journey, Zhu hints to Liang that she is actually a woman. For example, she compares them to a pair of mandarin ducks (a symbol of lovers in Chinese culture), but Liang does not catch her hints and does not even have the slightest suspicion that his companion is a woman in disguise. Zhu finally comes up with an idea and tells Liang that she will act as a matchmaker for him and his “sister”. Before they part, Zhu reminds Liang to visit her residence later so he can propose to marry her “sister.” Liang and Zhu reluctantly part ways at the Changting pavilion. Months later, when Liang visits Zhu, he discovers that she is actually

a woman. They are devoted to and passionate about each other and they make a vow of “till death do us part”. The joy of their reunion is short-lived as Zhu’s parents have already arranged for her to marry a man from a rich family called Ma Wencai. Liang is heartbroken when he hears the news and his health gradually deteriorates until he becomes critically ill. He dies in office later as a county magistrate. On the day of Ma and Zhu’s marriage, mysterious whirlwinds prevent the wedding procession from escorting the bride beyond Liang’s grave, which lies along the journey. Zhu leaves the procession to pay her respects to Liang. She descends in bitter despair and begs for the grave to open up. Suddenly, the grave opens with a clap of thunder. Without further hesitation, Zhu throws herself into the grave to join Liang. Their spirits turn into a pair of beautiful butterflies and emerge from the grave. They fly away together as a pair of butterflies and are never to be separated again.(!) www.graphicdiffer.com

any people are fond of ladybugs (Coccinellidae ) because of their colorful, spotted appearance. But farmers love them for their appetite. Most ladybugs voraciously consume plant-eating insects, such as aphids, and in doing so they help to protect crops. Ladybugs lay hundreds of eggs in the colonies of aphids and other plant-eating pests. When they hatch, the ladybug larvae immediately begin to feed.Ladybugs are also called lady beetles or, in Europe, ladybird beetles. There are about 5,000 different species of these insects, and not all of them have the same appetites. A few ladybugs prey not on planteaters but on plants. The Mexican bean beetle and the squash beetle are destructive pests that prey upon www.graphicdiffer.com

the crops mentioned in their names. Ladybugs appear as half-spheres, tiny, spotted, round or oval-shaped domes. They have short legs and antennae. Their distinctive spots and attractive colors are meant to make them appealing to predators. Ladybugs can secrete a fluid from joints in their legs which gives them a foul taste. Their coloring is likely a reminder to any animals that have tried to eat their kind before: â&amp;#x20AC;&amp;#x153;I taste awful.â&amp;#x20AC;? A threatened ladybug may both play dead and secrete the unappetizing substance to protect itself.

The Coccinellidae The Coccinellidae are generally considered useful insects, because many species feed on aphids or scale insects, which are pests in gardens, agricultural fields, orchards, and similar places. Within the colonies of such plant-eating pests, they will lay hundreds of eggs, and when these hatch the larvae will commence feeding immediately. However, some species do have unwelcome effects; among these, the most prominent are the subfamily Epilachninae, which are plant eaters. Usually, Epilachninae are only mild agricultural pests, eating the leaves of grain, potatoes, beans, and various other crops, but their numbers can increase explosively in years when their natural enemies.

The domestic cat (Felis silvestris catus) is a small, usually furry, domesticated, and carnivorous mammal. It is often called a housecat when kept as an indoor pet, or simply a cat when there is no need to distinguish it from other felids and felines. Cats are often valued by humans for companionship, and their ability to hunt vermin and household pests.

The origin of the domestic dog (Canis lupus familiaris or Canis familiaris) began from a single domestication of a now-extinct wolf-like canid in Western Europe 11 to 16 thousand years ago. This period predates the rise of agriculture and implies that the earliest dogs arose alongside hunter-gathers rather than agriculturists.

Cats sleep an average of fifteen hours a day, and some can sleep up to twenty hours in a twenty-four hour period. Which raises the question: Why do cats sleep so much? The first thing you should realize is that cats are most active between dusk and dawn, which means that they sleep mostly during the day and become active around twilight.

Tales of the Frog and Snail

This newsletter is just a dummy indesign template demo by Graphicdiffer.com. You can free to download and are permitted to use for personal project or commercial projects at http://www.graphicdiffer.com/indesign-newsletter-templates 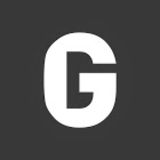