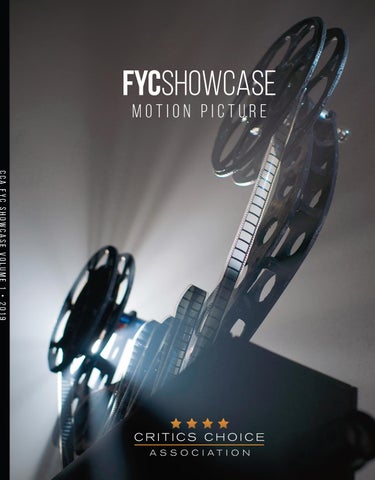 BEST PICTURE OF THE YEAR Produced By

WATERS’ WILL HAVE YOU ON YOUR FEET.” AWARDS CIRCUIT, Chris James

BEST PICTURE OF THE YEAR

For more on this film, go to www.FocusFeaturesGuilds2019.com

AN UNEXPECTED SUPERHERO FILM. The remarkable life of Harriet Tubman is told with heart and cinematic craft.” The Guardian

“A lustrous, gripping epic of the legendary freedom fighter’s life.” The Hollywood Reporter

FOR YOUR CONSIDERATION IN ALL CATEGORIES

SYNOPSIS: Hustlers follows a crew of savvy former strip club employees who band together to turn the tables on their Wall Street clients. The film is inspired by the article published by New York Magazine entitled “The Hustlers at Scores” written by Jessica Pressler. CAST &amp; CREW: Written and directed by Lorene Scafaria, the film is produced by Elaine Goldsmith, p.g.a., Jessica Elbaum, p.g.a., Jennifer Lopez, Benny Medina, Will Ferrell and Adam McKay. The ensemble cast includes Constance Wu, Jennifer Lopez, Julia Stiles, Keke Palmer, Lili Reinhart, with Mercedes Ruehl, and Cardi B. With cinematography by Todd Banhazl, editing by Kayla M. Emter, production design by Jane Musky, costume design by Mitchell Travers, makeup by Margot Boccia, hairstyling by Angel De Angelis, supervising sound editing by Sean McCormack, Jon Wakeham, sound mixing by Tom Nelson, re-recording mixing by John Ross, Christian P. Minkler. PRODUCTION / DISTRIBUTION: STXfilms presents a Gloria Sanchez/Nuyorican Production in Association with Annapurna Pictures a Lorene Scafaria Film. SUMMARY: HUSTLERS brings together a compelling mix of humor, spectacle, social commentary, and a group of disparate women who team up and look for ways to even the odds that are stacked against them. Inspired by true events, HUSTLERS is a comedy-drama that follows a crew of savvy strip club employees who turn the tables on their Wall Street clients. At the start of 2007, Destiny (Constance Wu) is a young woman struggling to make ends meet. It’s not easy: the managers, DJs, and bartenders expect a cut leaving Destiny with a meager payday after a long night of stripping. Her life changes forever when she meets Ramona (Jennifer Lopez), the club’s top money earner, who’s always in control, has the clientele figured out, and really knows her way around a pole. Ramona gives Destiny a crash course in various poses and pole moves. But Destiny’s most important lesson is that when you’re part of a broken system, you must hustle or be hustled. To that end, Ramona outlines for her the different tiers of their Wall Street clientele. The two women find themselves making more money than they can spend – until the September 2008 economic collapse. Wall Street stole from everyone. Now, Ramona, Destiny, and two dancers who’ve joined their little family – the unstoppable Mercedes (Keke Palmer) and the young and innocent Annabelle (Lili Reinhart) – look to turn the tables. They cook up a scheme to get their lives back on the fast-track to success. The game is still rigged against them, so to even the playing field Ramona devises a special drug cocktail that leaves their customers helpless against the ladies’ charms. Nobody’s really getting hurt; it’s just like robbing a bank, except the men are handing them the keys. The foursome creates a bond tighter than any familyuntil things get out of control.

HOW TO TRAIN YOUR DRAGON

SYNOPSIS: From DreamWorks Animation, How to Train Your Dragon: The Hidden World is the exciting and emotional conclusion to one of the most beloved animated franchises in film history and marks the culmination of an epic 10-year journey that first began with 2010’s How to Train Your Dragon and continued with 2014’s How to Train Your Dragon 2 (both Critics’ Choice Awards nominees for Best Animated Film). The latest chapter is a surprising tale about growing up, finding the courage to face the unknown and how nothing can ever train you to let go. What began as an unlikely friendship between an adolescent Viking and a fearsome Night Fury dragon has become an epic adventure spanning their lives. Now chief and ruler of Berk alongside Astrid, Hiccup has created a gloriously chaotic dragon utopia. When the sudden appearance of a female Light Fury coincides with the darkest threat their village has ever faced, Hiccup and Toothless must leave the only home they’ve known and journey to a hidden world thought only to exist in myth. As their true destines are revealed, dragon and rider will fight together—to the very ends of the Earth—to protect everything they’ve grown to treasure. CAST &amp; CREW: Voice Cast: Jay Baruchel, America Ferrera, Cate Blanchett, Gerard Butler, Jonah Hill, Kristen Wiig, Justin Rupple, Christopher Mintz-Plasse, Craig Ferguson, Kit Harington and F. Murray Abraham. Directed by Dean DeBlois. Written by Dean DeBlois, based on the books of Cressida Cowell. Produced by Brad Lewis and Bonnie Arnold. Original Score by John Powell. PRODUCTION / DISTRIBUTION: DreamWorks Animation / Universal Pictures SUMMARY: “Writer-Director Dean DeBlois has again invested the story with adventure, emotion, great characters, and this time even a charming romance. Visually it is stunning. This may also be composer John Powell’s finest moment in the series, with an orchestral score that simply soars. Dragon fans are in for a treat.” - Pete Hammond, Deadline “A delightful, gorgeous, and touchingly conclusive third adaptation of the fantastical universe of Vikings and firebreathers. Dean DeBlois’ enriching approach has been to treat the story of scrappy Viking scion Hiccup and his trusted dragon partner Toothless as a carefully seeded trilogy with the emotional contours of a coming-of-age epic. It’s one of the hallmarks of these movies that photorealistic beauty and otherworldly awe are so well meshed. DeBlois engineers this

tale towards an expectedly exciting and poignant conclusion.” - Robert Abele, The Wrap“ “The perfect conclusion to one of the best animated trilogies of all time. Breathtakingly beautiful. The best How to Train Your Dragon to date. You will leave this film with tears in your eyes and a smile on your face. Deeply moving and visually stunning. An animated adventure that shouldn’t be missed.” - Scott Menzel, We Live Entertainment “How to Train Your Dragon soars again! Fantastic!” – Shawn Edwards, FOX-TV “Pure magic! A thrilling, magical adventure! A funny, feel good, thrilling film! One last chance to ride with these characters... don’t miss it!” - Dave Morales, FOX TV Houston

“DEAN DEBLOIS BRINGS HIS WONDROUS DRAGON TRILOGY TO A SPECTACULAR FINISH. THE COURTSHIP BETWEEN TOOTHLESS AND LIGHT FURY IS A THING OF BALLETIC BEAUTY THAT BRINGS OUT THE DAZZLING ARTISTRY OF THE ANIMATION.”

WITH AN ORCHESTRAL SCORE THAT SIMPLY SOARS.”

FOR YOUR CONSIDERATION IN ALL CATEGORIES INCLUDING