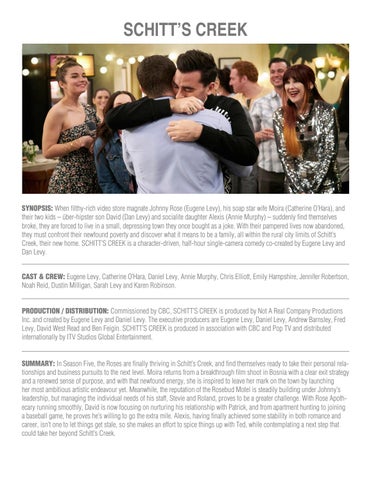 SYNOPSIS: When filthy-rich video store magnate Johnny Rose (Eugene Levy), his soap star wife Moira (Catherine O’Hara), and their two kids – über-hipster son David (Dan Levy) and socialite daughter Alexis (Annie Murphy) – suddenly find themselves broke, they are forced to live in a small, depressing town they once bought as a joke. With their pampered lives now abandoned, they must confront their newfound poverty and discover what it means to be a family, all within the rural city limits of Schitt’s Creek, their new home. SCHITT’S CREEK is a character-driven, half-hour single-camera comedy co-created by Eugene Levy and Dan Levy. CAST & CREW: Eugene Levy, Catherine O’Hara, Daniel Levy, Annie Murphy, Chris Elliott, Emily Hampshire, Jennifer Robertson, Noah Reid, Dustin Milligan, Sarah Levy and Karen Robinson. PRODUCTION / DISTRIBUTION: Commissioned by CBC, SCHITT’S CREEK is produced by Not A Real Company Productions Inc. and created by Eugene Levy and Daniel Levy. The executive producers are Eugene Levy, Daniel Levy, Andrew Barnsley, Fred Levy, David West Read and Ben Feigin. SCHITT’S CREEK is produced in association with CBC and Pop TV and distributed internationally by ITV Studios Global Entertainment. SUMMARY: In Season Five, the Roses are finally thriving in Schitt’s Creek, and find themselves ready to take their personal relationships and business pursuits to the next level. Moira returns from a breakthrough film shoot in Bosnia with a clear exit strategy and a renewed sense of purpose, and with that newfound energy, she is inspired to leave her mark on the town by launching her most ambitious artistic endeavour yet. Meanwhile, the reputation of the Rosebud Motel is steadily building under Johnny’s leadership, but managing the individual needs of his staff, Stevie and Roland, proves to be a greater challenge. With Rose Apothecary running smoothly, David is now focusing on nurturing his relationship with Patrick, and from apartment hunting to joining a baseball game, he proves he’s willing to go the extra mile. Alexis, having finally achieved some stability in both romance and career, isn’t one to let things get stale, so she makes an effort to spice things up with Ted, while contemplating a next step that could take her beyond Schitt’s Creek.