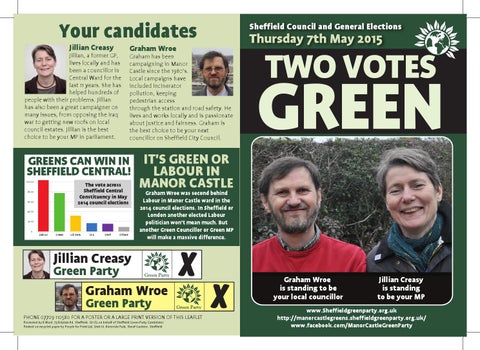 Your candidates Jillian Creasy Jillian, a former GP, lives locally and has been a councillor in Central Ward for the last 11 years. She has helped hundreds of people with their problems. Jillian has also been a great campaigner on many issues, from opposing the Iraq war to getting new roofs on local council estates. Jillian is the best choice to be your MP in parliament.

Graham Wroe Graham has been campaigning in Manor Castle since the 1980â&#x20AC;&#x2122;s. Local campaigns have included incinerator pollution, keeping pedestrian access through the station and road safety. He lives and works locally and is passionate about justice and fairness. Graham is the best choice to be your next councillor on Sheffield City Council.

GREENS CAN WIN IN IT'S GREEN OR SHEFFIELD CENTRAL! LABOUR IN 10000

The vote across Sheffield Central Constituency in May 2014 council elections

Labour in Manor Castle ward in the 2014 council elections. In Sheffield or London another elected Labour politician won't mean much. But another Green Councillor or Green MP will make a massive difference.

Graham Wroe is standing to be your local councillor

Jillian Creasy is standing to be your MP

CHOOSE GREEN NHS NOT FOR SALE

Green MP Caroline Lucas is a force for fairness in parliament. If Jillian Creasy is elected on May 7th she will be a fresh voice for Sheffield. Voting Green in the General Election will make a real difference here.

Residents in Central and Broomhill trust Green councillors and know they work hard for local people. Graham Wroe will spread this work to Manor Castle. Voting Green in the Council Election will help us help you.

GREENS believe in keeping a public NHS and better social care to relieve the pressure on hospitals.

LABOUR wasted billions on PFI schemes and let private firms profit from the NHS before the Coalition.

GREENS oppose nuclear power and wars for oil. We would reduce energy use and invest in renewables.

LABOUR took us to war, planned new nuclear power stations and have not opposed fracking.

GREENS want a living wage for all with wealthy people and big business paying their fair share.

LABOUR tolerated huge bonuses and tax evasion and started the attack on welfare and housing benefits.

GREEN ACTION Green councillors influence the Council to get the best deal for our area and Sheffield.

We have persuaded the Council to fit solar panels on thousands of council homes, creating jobs, saving tenants’ energy bills and bringing in extra income for the council.

Graham and Jillian campaigning for a pedestrian crossing at the dangerous Duke Street junction. In this year's council budget we proposed: • Cuts to the price of parking permits and the pay of top executives • Stopping the privatising of local health services • A 20 mph speed limit in the city centre to reduce accidents • More PCSOs to help communities fight crime and anti-social behaviour. All were rejected by the ruling Labour group.