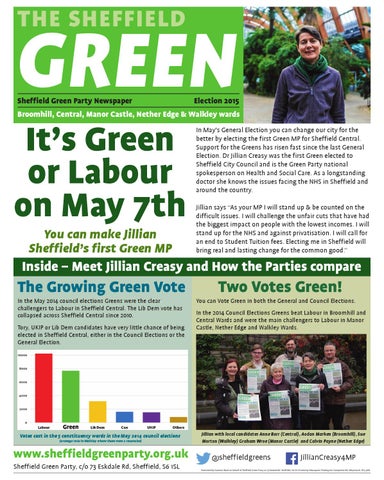 In May's General Election you can change our city for the better by electing the first Green MP for Sheffield Central. Support for the Greens has risen fast since the last General Election. Dr Jillian Creasy was the first Green elected to Sheffield City Council and is the Green Party national spokesperson on Health and Social Care. As a longstanding doctor she knows the issues facing the NHS in Sheffield and around the country. Jillian says “As your MP I will stand up & be counted on the difficult issues. I will challenge the unfair cuts that have had the biggest impact on people with the lowest incomes. I will stand up for the NHS and against privatisation. I will call for an end to Student Tuition fees. Electing me in Sheffield will bring real and lasting change for the common good.”

Inside – Meet Jillian Creasy and How the Parties compare

The Growing Green Vote In the May 2014 council elections Greens were the clear challengers to Labour in Sheffield Central. The Lib Dem vote has collapsed across Sheffield Central since 2010.

Tory, UKIP or Lib Dem candidates have very little chance of being elected in Sheffield Central, either in the Council Elections or the General Election.

You can Vote Green in both the General and Council Elections. In the 2014 Council Elections Greens beat Labour in Broomhill and Central Wards and were the main challengers to Labour in Manor Castle, Nether Edge and Walkley Wards.

GREEN POLICIES IN ACTION - HOW THE PARTIES COMPARE The Cuts – In January MPs were asked to vote on another £30 Billion of spending cuts to public services.

Most Labour MPs voted with the Conservative/Lib Dem Government for these cuts. Green Party MP Caroline Lucas voted against the cuts. Greens would close the deficit by taxing people with incomes of over £100,000/year more, introducing a Wealth Tax and tackling tax avoidance and tax evasion.

Greens oppose privatisation of the NHS. The market system is costly to run and money is lost into private profits and shareholders’ pockets.

The Labour Government encouraged private companies to bid for NHS work and have not committed to reversing privatisation.

Greens would abolish Tuition fees and pay for this through a rise in taxes on large businesses.

Labour introduced Tuition fees when they were in Government and are only calling for a reduction NOT the abolition of tuition fees.

The Labour MP for Sheffield Central was not one of 14 Labour MP's who signed to support the motion.

Greens support a ban on fracking and would oppose it in Parliament. Green MP Caroline Lucas voted for fracking to be suspended until a further assessment had been made.

A halt to Fracking in the UK

• Get a stakeboard for your garden @greenjillian

Meet Dr Jillian Creasy How long have you lived in Sheffield?

I came in the 1980s to train as a General Practitioner and ended up staying. I love the friendliness and city life and being close to the Peak District.

Why the Green Party? I became active in the Green Party following the 9/11 atrocities and found they had more to say than just “no war”. The Green Party members I met were talking about how to create a more sustainable world in which we would not be fighting wars to control oil supplies. Later I joined the campaign against the giant new incinerator and was impressed by the careful research, community involvement and positive alternatives put forward by the Green Party.

Jillian talking to a local constituent

What did it feel like when you were elected as the first Green Councillor on Sheffield City Council in 2004? It was exciting and daunting, being the only Green amongst 84 councillors, but I was ready to learn and make the most of every opportunity. In those days I did more work on national and international campaigns – human rights, nuclear power and climate change. As the Green Party Group on Sheffield City Council has grown we are much more involved in community and city-wide issues. This General Election campaign has plunged me back into speaking and writing about the big political issues (austerity, the NHS) and reminds me of those early years.

What is your proudest achievement in your time as a Sheffield Councillor? It has to be working with local people on campaigns to improve their lives and neighbourhoods. This has included fighting to save a Surestart Centre and local schools, to get people the housing they need, parks improved and setting up a new community groups. The best thing is seeing people come together and find their voice. Whatever the outcome of the campaign, people are more empowered and better connected.

Are there skills that you have as a Doctor that would help you as a local MP? The single most important thing in both roles is listening to what patients (or constituents) are telling you. And then, while helping individuals, you learn how the system works (or fails) and build up a fund of knowledge and connections. It is important to be able to multitask and to deal with mundane things alongside urgent and high profile issues.

What changes have you seen in Sheffield over the last 30 years? Changes in employment patterns: heavy industry has declined and research, digital and creative industries are more important. But in the last five years, the city has been blighted by unemployment, low wages and cuts to public services. I would fight for a fairer economy and more equal city. The City Centre has changed massively, with lots more apartment blocks and bars taking over from small shops. The failed New Retail Quarter has cast a planning blight on the heart of the city. Hopefully we will now see a project with more independent shops and entertainment rather than chain stores and yet more car parks.

What policy or laws would you like to change as an MP? Repeal the Bedroom Tax, make the living wage compulsory, stop tax dodging, reverse the privatisation of the NHS & other public services, and bring the railways back into public ownership. I would also like to see proportional representation at all levels of government, including an elected second chamber (House of Lords) so that parliament represents a range of views, not just two very similar big parties.

What do you think Sheffield people want from a local MP? Hard working, making the effort to find out their views and represent them, having a vision for a sustainable and vibrant city; standing up against the system when it needs to change. People want their MP to be visible and not to duck out of votes. If you don’t stand up for what you believe in what was the point of all those people voting for you?

What difference would a Green MP make? Caroline Lucas was elected as the first Green MP in Brighton at the last General Election. Caroline has stood out from the 650 or so others because she does stand up for what she believes in and gives a voice to people who are often ignored by other politicians. It's not just the people on the South Coast who want principled politicians who stick by their values. That’s what I can offer the people of Sheffield Central. The North deserves a ‘Caroline Lucas’ just as much as the South does.

When you aren’t being a politician or a GP how do you relax? I was lucky enough to get an allotment when I first moved to Broomhall. I love growing fruit and vegetables and then cooking treats for my family and friends. I also belong to a book group and sing in a choir. My favourite holidays are walking in the mountains – in the UK or Europe.

Relaxing on the allotment

We’re backing Jillian “Of the major parties, only the Greens are proposing serious action on climate change, tax avoidance and raising living standards to a point where people notice the difference. Their longterm attitude to the issues that matter is why I'm backing Jillian this May.”

“Jillian works for people of all backgrounds and beliefs without fear or favour. She is always there to answer questions and support community projects.”

"Cllr Creasy provided a great deal of assistance when we were looking to expand into the City Centre. We looked at a pub that was part of the new development in the City Centre. Due to the Compulsory Purchase Order on it the process stalled, but Jillian stepped in and allowed us to get the ball rolling again. She was very enthused about promoting a local business and has been very involved with local residents and businesses concerning the redevelopment of the Kelham Island area."

“As leader of the Green Group on the city council, Jillian stands out from the others. She has a great deal of integrity and is not afraid to speak out against the main parties. I’m sure she will do the same in Parliament.”

“Jillian has worked hard to support small businesses like ours and continues to fight for Post Offices to stay open. As an MP she would have more influence to stand up for the community she represents.”

Joe and Surinder Johal – Broomhall Shopkeepers “I have experienced first-hand Jillian’s great commitment to the local community, in particular in her fight to save the Sure Start Children’s Centre from closure – a valued resource which Jillian supported as a board member. I know many families have appreciated her contribution to the fight to save this and other precious services.”

“Jillian is a strong advocate for peace, justice and human rights. Jillian has condemned Israel's occupation of the West Bank and bombardment, destruction and blockade of Gaza, calling for action to ensure Israel complies with International Law.”

“Jillian helps the people. In this area, she worked with local women to run a campaign to get our housing association to fit new doors and windows and new kitchens for many of us. She has improved play areas, got funding for youth activities and really cares about our children’s futures.”