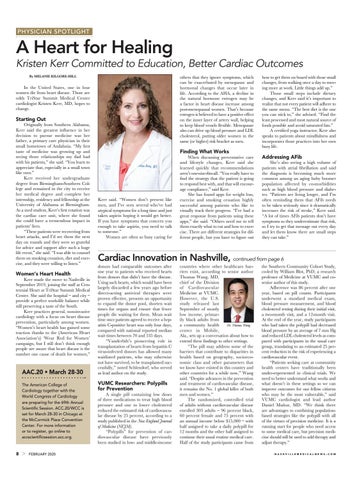 A Heart for Healing

others that they ignore symptoms, which can be exacerbated by menopause and hormonal changes that occur later in life. According to the AHA, a decline in the natural hormone estrogen may be a factor in heart disease increase among post-menopausal women. That’s because estrogen is believed to have a positive effect on the inner layer of artery wall, helping to keep blood vessels flexible. Menopause also can drive up blood pressure and LDL cholesterol, putting older women in the same (or higher) risk bracket as men.

In the United States, one in four women die from heart disease. Those are odds TriStar Summit Medical Center cardiologist Kristen Kerr, MD, hopes to change.

Originally from Southern Alabama, Kerr said the greatest influence in her decision to pursue medicine was her father, a primary care physician in their small hometown of Andalusia. “My first taste of medicine was growing up and seeing those relationships my dad had with his patients,” she said. “You learn to appreciate that, especially in a small town like ours.” Kerr received her undergraduate degree from Birmingham-Southern College and remained in the city to receive her medical degree and complete her internship, residency and fellowship at the University of Alabama at Birmingham. As a med student, Kerr’s first rotation was the cardiac care unit, where she found she could have a tremendous impact in patients’ lives. “These patients were recovering from heart attacks, and I’d see them the next day on rounds and they were so grateful for advice and support after such a huge life event,” she said. “I was able to counsel them on smoking cessation, diet and exercise, and they were willing to listen.”

Kerr made the move to Nashville in September 2019, joining the staff at Centennial Heart at TriStar Summit Medical Center. She said the hospital – and city – provide a perfect work-life balance while still preserving a taste of the South. Kerr practices general, non-invasive cardiology with a focus on heart disease prevention, particularly among women. “Women’s heart health has gained some traction thanks to the (American Heart Association’s) ‘Wear Red for Women’ campaign, but I still don’t think enough people are aware that heart disease is the number one cause of death for women,”

AAC.20 • March 28-30 The American College of Cardiology together with the World Congress of Cardiology are preparing for the 69th Annual Scientific Session. ACC.20/WCC is set for March 28-30 in Chicago at the McCormick Place Convention Center. For more information or to register, go online to accscientificsession.acc.org.

Kerr said. “Women don’t present like men, and I’ve seen several who’ve had atypical symptoms for a long time and just taken aspirin hoping it would get better. If you have symptoms that concern you enough to take aspirin, you need to talk to someone.” Women are often so busy caring for

When discussing preventative care and lifestyle changes, Kerr said she learned quickly that recommendations aren’t one-size-fits-all. “You really have to find the strategy that the patient is going to respond best with, and that will encourage compliance,” said Kerr. She has found apps for weight loss, exercise and smoking cessation highly successful among patients who like to visually track their progress. “I’ve had a great response from patients using these apps,” she said. “Others need me to tell them exactly what to eat and how to exercise. There are different strategies for different people, but you have to figure out

how to get them on board with those small changes, from walking once a day to moving more at work. Little things add up.” Those small steps include dietary changes, and Kerr said it’s important to realize that not every patient will adhere to the same menu. “The best diet is the one you can stick to,” she advised. “Find the least processed and most natural source of foods possible and avoid saturated fats.” A certified yoga instructor, Kerr also speaks to patients about mindfulness and incorporates those practices into her own busy life.

She’s also seeing a high volume of patients with atrial fibrillation and said the diagnosis is becoming much more common among an aging baby boomer population affected by co-morbidities such as high blood pressure and diabetes. “Patients are living longer, and I’m often reminding them that AFib needs to be taken seriously since it dramatically increases the risk of stroke,” Kerr said. “A lot of times AFib patients don’t have symptoms so they underestimate that risk, so I try to get that message out every day and let them know there are small steps they can take.”

Cardiac Innovation in Nashville, continued from page 6 donors had comparable outcomes after one year to patients who received hearts from donors that didn’t have the disease. Using such hearts, which would have been largely discarded a few years ago before direct-acting antiviral therapies were proven effective, presents an opportunity to expand the donor pool, shorten wait times for organs and ensure that fewer people die waiting for them. Mean wait time once patients agreed to receive a hepatitis C-positive heart was only four days, compared with national reported median wait times between 70 and 535 days. “Vanderbilt’s pioneering role in transplantation of hearts from hepatitis C virus-infected donors has allowed many waitlisted patients, who may otherwise not have survived, to be transplanted successfully,” noted Schlendorf, who served as lead author on the study.

countries where other healthcare barriers exist, according to senior author Thomas Wang, MD, chief of the Division of Cardiovascular Medicine at VUMC. However, the U.S. study released last September of mostly low income, primarily black adults from a community health Dr. Thomas Wang center in Mobile, Ala., sets up a conversation about how to extend these findings to other settings. “The pill may address some of the barriers that contribute to disparities in health based on geography, socioeconomic class and other parameters that we know have existed in this country and other countries for a while now,” Wang said. “Despite advances in the prevention and treatment of cardiovascular disease, it remains the No. 1 global killer of both men and women.” The randomized, controlled trial of adults without cardiovascular disease enrolled 303 adults – 96 percent black, 60 percent female and 75 percent with an annual income below $15,000 – with half assigned to take a daily polypill for 12 months and the other half assigned to continue their usual routine medical care. Half of the study participants came from

the Southern Community Cohort Study, co-led by William Blot, PhD, a research professor of Medicine at VUMC and cosenior author of this study. Adherence was 86 percent after one year, based on pill counts. Participants underwent a standard medical exam, blood pressure measurement, and blood cholesterol testing during their initial visit, a two-month visit, and a 12-month visit. At the end of the year, study participants who had taken the polypill had decreased blood pressure by an average of 7 mm Hg and reduced LDL cholesterol levels as compared with participants in the usual care group, translating to an estimated 25 percent reduction in the risk of experiencing a cardiovascular event. “Patients seeking care at community health centers have traditionally been under-represented in clinical trials. We need to better understand what works and what doesn’t in these settings so we can improve outcomes for our fellow citizens who may be the most vulnerable,” said VUMC cardiologist and lead author Daniel Muñoz, MD. “We think there are advantages to combining populationbased strategies like the polypill with all of the virtues of precision medicine. It is a running start for people who need access to some medical care, but precision medicine should still be used to add therapy and adjust therapy.” nashvillemedicalnews