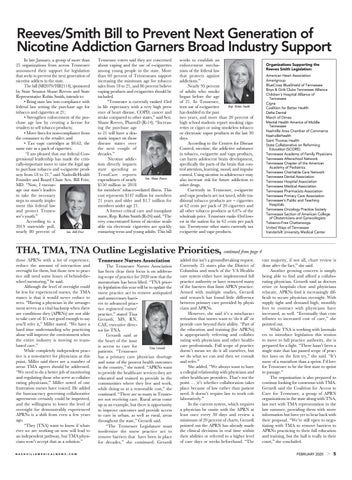 Reeves/Smith Bill to Prevent Next Generation of Nicotine Addiction Garners Broad Industry Support In late January, a group of more than 25 organizations from across Tennessee announced their support for legislation that seeks to prevent the next generation of nicotine addicts in the state. The bill (SB2079/HB2114), sponsored by State Senator Shane Reeves and State Representative Robin Smith, intends to: • Bring state law into compliance with federal law setting the purchase age for tobacco and cigarettes at 21; • Strengthen enforcement of the purchase age law by creating a license for retailers to sell tobacco products; • Move fines for non-compliance from the consumer to the retailer; and • Tax vape cartridges at $0.62, the same rate as a pack of cigarettes. “I am pleased that our federal Congressional leadership has made the critically-important move to raise the legal age to purchase tobacco and e-cigarette products from 18 to 21,” said NashvilleHealth Founder and Board Chair Sen. Bill Frist, MD. “Now, I encourage our state’s leaders to take the necessary steps to smartly implement this federal law and protect Tennessee’s youth.” According to a 2019 statewide poll, Sen. Bill Frist nearly 80 percent of

Tennessee voters said they are concerned about vaping and the use of e-cigarettes among young people in the state. More than 60 percent of Tennesseans support increasing the minimum age for tobacco sales from 18 to 21, and 86 percent believe vaping products and e-cigarettes should be included. “Tennessee is currently ranked 43rd in life expectancy with a very high presence of heart disease, COPD, cancer and stroke compared to other states,” said Sen. Shane Reeves, PharmD (R-14). “Increasing the purchase age to 21 will have a dramatic impact on those disease states over the next couple of decades.” Nicotine addiction directly impacts state spending as TennCare reports Sen. Shane Reeves expenditures of nearly $150 million in 2018 for members’ tobacco-related illness. This cost represents $147 million for members 21 years and older and $1.7 million for members under age 21. A former critical care and transplant nurse, Rep. Robin Smith (R-26) said, “The very concentrated forms of nicotine available via electronic cigarettes are quickly ensnaring teens and young adults. This bill

works to establish an enforcement mechanism of the federal law that protects against addictions.” Nearly 95 percent of adults who smoke began before the age of 21. In Tennessee, Rep. Robin Smith teen use of e-cigarettes has doubled in the past two years, and more than 20 percent of high school students report smoking cigarettes or cigars or using smokeless tobacco or electronic vapor products in the last 30 days. According to the Centers for Disease Control, nicotine, the addictive substance in tobacco, e-cigarette and vape products, can harm adolescent brain development, specifically the parts of the brain that control attention, learning, mood, and impulse control. Using nicotine in adolescence may also increase risk for future addiction to other drugs. Currently in Tennessee, e-cigarette and vape products are not taxed, while traditional tobacco products are – cigarettes at 62 cents per pack of 20 cigarettes and all other tobacco products at 6.6% of the wholesale price. Tennessee ranks 43rd lowest in the nation for its 62 cents per pack tax. Twenty-one other states currently tax e-cigarette and vape products.

THA, TMA, TNA Outline Legislative Priorities, continued from page 4 those APRNs with a lot of experience, reduce the amount of interaction and oversight for them, but those new to practice still need some hours of behind-thewheel mentoring,” he said. Although the level of oversight could be less for experienced nurses, the TMA stance is that it would never reduce to zero. “Having a physician in the arrangement serves as a vital backstop when there are conditions they (APRNs) are not able to take care of. It’s not good enough to say you’ll refer it,” Miller stated. “We have a hard time understanding why practicing alone will improve the environment when the entire industry is moving to teambased care.” While completely independent practice is a non-starter for physicians at this point, Miller said there are a number of areas TMA agrees should be addressed. “We need to do a better job of monitoring and regulating those who serve as collaborating physicians,” Miller noted of one frustration nurses have voiced. He added the bureaucracy governing collaborative agreements certainly could be improved, and the willingness to lower the level of oversight for demonstrably experienced APRNs is a shift from even a few years ago. “They (TNA) want to know if whatever we are working on now will lead to an independent pathway, but TMA physicians won’t accept that as a solution.” nashvillemedicalnews

The Tennessee Nurses Association has been clear their focus is on addressing scope of practice for 2020 now that the moratorium has been lifted. “TNA priority legislation this year will be to update the nurse practice act to remove antiquated and unnecessary barriers to advanced practice registered nurses’ practice,” stated Tina Gerardi, MS, RN, CAE, executive director for TNA. Gerardi said at the heart of the issue is access to care for Tina Gerardi patients. “Tennessee has a primary care physician shortage and some of the poorest health outcomes in the country,” she noted. “APRNs want to provide the healthcare services they are educated and trained to provide in the communities where they live and work, while doing so at a reasonable cost,” she continued. “There are so many in Tennessee not receiving care. Rural areas come up as an example, but there is opportunity to improve outcomes and provide access to care in urban, as well as rural, areas throughout the state,” Gerardi said. “The Tennessee Legislature must modernize the nurse practice act to remove barriers that have been in place for decades,” she continued. Gerardi

added this isn’t a groundbreaking request. Currently 25 states plus the District of Columbia and much of the VA Healthcare system either have implemented full practice authority or have removed many of the barriers that limit APRN practice. Armed with multiple studies, Gerardi said research has found little difference between primary care provided by physicians and APRNs. However, she said it’s a mischaracterization that nurses want to ‘do it all’ or provide care beyond their ability. “Part of the education and training (for APRNs) is appropriately referring and collaborating with physicians and other healthcare professionals. Full scope of practice doesn’t mean we do it all ourselves, but we do what we can and then we consult and refer.” She added, “We always want to have a collegial relationship with physicians and other healthcare providers. That’s not the point … it’s whether collaboration takes place because of law rather than patient need. It doesn’t require law to work collaboratively.” In the current system, which requires a physician be onsite with the APRN at least once every 30 days and review a minimum of 20 percent of charts, Gerardi pointed out the APRN has already made the clinical decisions in real time within their abilities or referred to a higher level of care days or weeks beforehand. “The

vast majority, if not all, chart review is done after the fact,” she said. Another growing concern is simply being able to find and afford a collaborating physician. Gerardi said as doctors retire or hospitals close and physicians relocate, APRNs find it increasingly difficult to secure physician oversight. With supply tight and demand high, monthly fees to contract with physicians have increased, as well. “Eventually that contributes to increased cost of care,” she pointed out. While TNA is working with lawmakers to introduce legislation this session to move to full practice authority, she is prepared for a fight. “There hasn’t been a single state that has passed scope of practice laws on the first try,” she said. “It’s more of a marathon than a sprint. I’d love for Tennessee to be the first state to sprint to passage.” The organization is also prepared to continue looking for consensus with TMA. Gerardi said the Coalition for Access to Care for Tennessee, a group of APRN organizations in the state along with TNA, last met with TMA representation in the late summer, providing them with more information but have yet to hear back with their proposal. “We’re still open to negotiating with TMA to remove barriers to APRNs practicing to their full education and training, but the ball is really in their court,” she concluded. FEBRUARY 2020