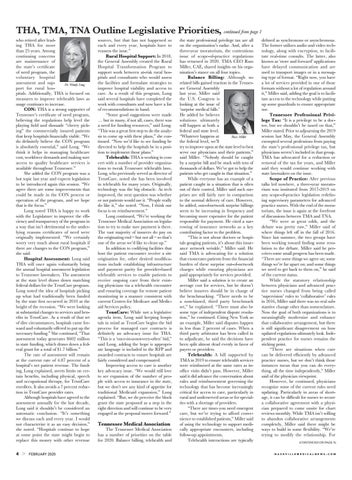 THA, TMA, TNA Outline Legislative Priorities, continued from page 1 who retired after leading THA for more than 25 years. Among continuing concerns are maintenance of the state’s certificate of need program, the voluntary hospital assessment and supDr. Wendy Long port for rural hospitals. Additionally, THA is focused on measures to improve telehealth laws as usage continues to increase. CON: THA is a strong supporter of Tennessee’s certificate of need program, believing the regulations help level the playing field and dissuade “cherry picking” the commercially insured patients that keep hospitals financially viable. “We do definitely believe the CON program is absolutely essential,” said Long. “We think it helps in managing healthcare cost, workforce demands and making sure access to quality healthcare services is available throughout Tennessee.” She added the CON program was a hot topic last year and expects legislation to be introduced again this session. “We agree there are some improvements that could be made in the CON process or operation of the program, and we hope that is the focus.” Long noted THA is happy to work with the Legislature to improve the efficiency and transparency of the program in a way that isn’t detrimental to the underlying reasons certificates of need were originally implemented. “We certainly worry very much about rural hospitals if there are changes to the CON program,” she said. Hospital Assessment: Long said THA will once again voluntarily bring the annual hospital assessment legislation to Tennessee lawmakers. The assessment at the state level draws down matching federal dollars for the TennCare program. Long noted the idea of hospitals picking up what had traditionally been funded by the state first occurred in 2010 at the height of the recession. “We were looking at substantial changes to services and benefits in TennCare. As a result of that set of dire circumstances, hospitals came forward and voluntarily offered to put up the necessary funding.” She continued, “That assessment today generates $602 million in state funding, which draws down a federal grant for a total of $1.7 billion.” The rate of assessment will remain at the current rate of 4.87 percent of a hospital’s net patient revenue. The funding, Long explained, averts limits on certain benefits, including physical, speech and occupational therapy, for TennCare enrollees. It also avoids a 7 percent reduction in TennCare provider rates. Although hospitals have agreed to the assessment annually for the last decade, Long said it shouldn’t be considered an automatic conclusion. “It’s something we discuss each and every year. I would not characterize it as an easy decision,” she noted. “Hospitals continue to hope at some point the state might begin to replace this money with other revenue 4

sources, but that has not happened so each and every year, hospitals have to reassess the issue.” Rural Hospital Support: In 2018, the General Assembly created the Rural Hospital Transformation Program to support work between at-risk rural hospitals and consultants who would assess the facilities and formulate strategies to improve hospital viability and access to care. As a result of this program, Long said several hospitals have completed the work with consultants and now have a list of recommendations in hand. “Some good suggestions were made … but in many, if not all, cases, there was a need for funding resources,” said Long. “This was a great first step to do the analysis to come up with these plans,” she continued. “Now we’d like to see funding be directed to help the hospitals be in a position to implement those plans.” Telehealth: THA is working in concert with a number of provider organizations to tweak Tennessee telehealth laws. Long, who previously served as director of TennCare, noted she has been involved in telehealth for many years. Originally, technology was the big obstacle. As tech improved, the next question was whether or not patients would use it. “People really do like it,” she noted. “Now, I think our focus is on reimbursement.” Long continued, “We’re working the Tennessee Medical Association on legislation to try to make sure payment is there. The vast majority of insurers do pay on the originating end – but not all – so that’s one of the areas we’d like to clean up.” In addition to codifying facilities that host the patient encounter receive a site origination fee, other desired modifications include establishing infrastructure and payment parity for provider-based telehealth services to enable patients to receive ongoing care from their existing physicians via a telehealth encounter and ensuring coverage for remote patient monitoring in a manner consistent with current Centers for Medicare and Medicaid Services policy. TennCare: While not a legislative agenda item, Long said keeping hospitals in mind as TennCare begins the bid process for managed care contracts is definitely an advocacy issue for THA. “This is a ‘once-in-a-not-very-often’ bid,” said Long, adding the hope is appropriate language is included in the RFP and awarded contracts to ensure hospitals are fairly considered and compensated. Improving access to care is another key advocacy issue. “We would still love to see expansion of the number of people with access to insurance in the state, but we don’t see any kind of appetite for traditional Medicaid expansion,” Long explained. “But, we do perceive the block grant the state proposed as a step in the right direction and will continue to be very engaged as the proposal moves forward.”

The Tennessee Medical Association has a number of priorities on the table for 2020. Balance billing, telehealth and

the state professional privilege tax are all on the organization’s radar. And, after a three-year moratorium, the contentious issue of scope-of-practice regulations has returned in 2020. TMA CEO Russ Miller, CAE, shared insights on his organization’s stance on all four topics. Balance Billing: Although no related bills gained traction in the Tennessee General Assembly last year, Miller said the U.S. Congress is looking at the issue of ‘surprise medical bills.’ He added he believes solutions ultimately will happen at both a federal and state level. “Whatever happens at Russ Miller the federal level, we’ll try to improve upon at the state level to best serve our physicians and their patients,” said Miller. “Nobody should be caught by a surprise bill and be stuck with tens of thousands of dollars. We’ve got to help the patients who get caught in that situation.” While everyone has an example of a patient caught in a situation that is often out of their control, Miller said such surprises are still fairly rare in comparison to the normal delivery of care. However, he added, out-of-network surprise billings seem to be increasing in frequency and becoming more expensive for the patient responsible for payment. He cited a narrowing of insurance networks as a key contributing factor to the problem. “This is not about doctors or hospitals gouging patients, it’s about this insurance network wrinkle,” Miller said. He said TMA is advocating for a solution that exonerates patients from the financial burden of these surprise out-of-network charges while ensuring physicians are paid appropriately for services provided. Miller said a solution is to create an average cost for services, but he doesn’t believe insurers should be in charge of the benchmarking. “There needs to be a non-biased, third party benchmark set,” he explained. “There must also be some type of independent dispute resolution,” he continued. Citing New York as an example, Miller said disputes happen in less than 2 percent of cases. When a third party arbitrator has been called in to adjudicate, he said the decisions have been split almost dead evenly in favor of payers or providers. Telehealth: A bill supported by TMA in 2019 to ensure telehealth services were reimbursed at the same rates as inoffice visits didn’t pass. However, Miller said it did advance the conversation about rules and reimbursement governing the technology that has become increasingly critical for access to care, particularly in rural and underserved areas or for specialties with a shortage of providers. “There are times you need emergent care, but we’re trying to afford convenience to established patients,” Miller said of using the technology to support medically appropriate encounters, including follow-up appointments. Telehealth interactions are typically

defined as synchronous or asynchronous. The former utilizes audio and video technology, along with encryption, to facilitate real-time consults. The latter, also known as ‘store and forward’ applications have delayed communication and are used to transport images or in a messaging type of format. “Right now, you have a lot of services provided in one of those formats without a lot of regulation around it,” Miller said, adding the goal is to facilitate access to the technology while putting up some guardrails to ensure appropriate use. Tennessee Professional Privilege Tax: “It is a privilege to be a doctor, but we shouldn’t be taxed on that,” Miller stated. Prior to adjourning the 2019 session last May, the General Assembly exempted several professions from paying the state’s professional privilege tax, but physicians weren’t included in that group. TMA has advocated for a reduction or removal of the tax for years, and Miller said they would continue working with state lawmakers on the issue. Scope of Practice: After previous talks led nowhere, a three-year moratorium was instituted from 2017-2019 on any scope-of-practice legislation redefining supervisory parameters for advanced practice nurses. With the end of the moratorium, the issue is again at the forefront of discussions between TMA and TNA. “We were at great odds, and the debate was pretty raw,” Miller said of where things left off in the fall of 2016. Since last summer, the two groups have been working toward finding some resolution to the debate. Miller said he perceives some small progress has been made. “There are some things we agree on; some things we’re far apart on; and some things we need to get back to them on,” he said of the current status. While the statutory relationship between physicians and advanced practice nurses changed from being called ‘supervision’ rules to ‘collaborative’ rules in 2016, Miller said there was no real substantive change other than nomenclature. Now the goal of both organizations is to meaningfully modernize and enhance that collaborative arrangement, but there is still significant disagreement on how updated regulations ultimately look. Independent practice for nurses remains the sticking point. “There are situations when care can be delivered efficiently by advanced practice nurses, but we don’t think those instances mean that you can do everything, all the time independently,” Miller said of the physician viewpoint. However, he continued, physicians recognize some of the current rules need updating. Particularly in areas of shortage, it can be difficult for nurses to secure a collaborative agreement with a physician prepared to come onsite for chart reviews monthly. While TMA isn’t willing to abandon collaborative arrangements completely, Miller said there might be ways to build in some flexibility. “We’re trying to modify the relationship. For (CONTINUED ON PAGE 5) nashvillemedicalnews