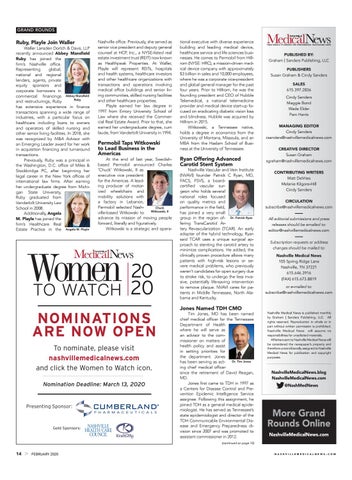 Ruby, Playle Join Waller Waller Lansden Dortch & Davis, LLP recently announced Abbey Mansﬁeld Ruby has joined the firm’s Nashville office. Representing global, national and regional lenders, agents, private equity sponsors and corporate borrowers in commercial financings Abbey Mansﬁeld Ruby and restructurings, Ruby has extensive experience in finance transactions spanning a wide range of industries, with a particular focus on healthcare including loans to owners and operators of skilled nursing and other senior living facilities. In 2018, she was recognized by M&A Advisor with an Emerging Leader award for her work in acquisition financing and turnaround transactions. Previously, Ruby was a principal in the Washington, D.C. office of Miles & Stockbridge PC, after beginning her legal career in the New York offices of international law firms. After earning her undergraduate degree from Michigan State University, Ruby graduated from Vanderbilt University Law School in 2008. Additionally, Angela M. Playle has joined the firm’s Healthcare Real Estate Practice in the Angela M. Playle

Permobil Taps Witkowski to Lead Business in the Americas At the end of last year, Swedishbased Permobil announced Charles ‘Chuck’ Witkowski, II as executive vice president for the Americas. A leading producer of motorized wheelchairs and mobility solutions with a factory in Lebanon, Permobil selected NashChuck Witkowski, II ville-based Witkowski to advance its mission of moving people forward, literally and figuratively. Witkowski is a strategic and opera-

tional executive with diverse experience building and leading medical device, healthcare service and life sciences businesses. He comes to Permobil from Hillrom (NYSE: HRC), a mission-driven medical device company with approximately $3 billion in sales and 10,000 employees, where he was a corporate vice-president and global general manager for the past four years. Prior to Hillrom, he was the founding president and CEO of Hubble Telemedical, a national telemedicine provider and medical device start-up focused on eradicating diabetic vision loss and blindness. Hubble was acquired by Hillrom in 2015. Witkowski, a Tennessee native, holds a degree in economics from the University of Montana, Missoula, and an MBA from the Haslam School of Business at the University of Tennessee.

Jones Named TDH CMO Tim Jones, MD has been named chief medical officer for the Tennessee Department of Health where he will serve as an advisor to the commissioner on matters of health policy and assist in setting priorities for the department. Jones Dr. Tim Jones has been serving as acting chief medical officer since the retirement of David Reagan, MD.  Jones first came to TDH in 1997 as a Centers for Disease Control and Prevention Epidemic Intelligence Service assignee. Following this assignment, he joined TDH as a general medical epidemiologist. He has served as Tennessee’s state epidemiologist and director of the TDH Communicable Environmental Disease and Emergency Preparedness division since 2007 and was promoted to assistant commissioner in 2012.