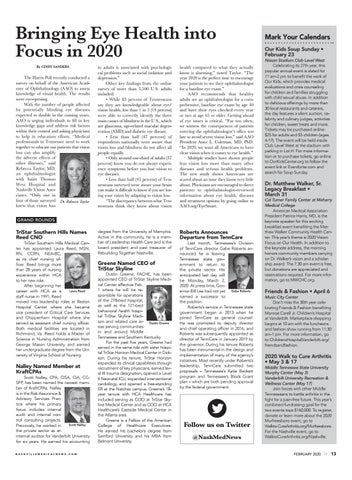 Bringing Eye Health into Focus in 2020 By CINDY SANDERS

The Harris Poll recently conducted a survey on behalf of the American Academy of Ophthalmology (AAO) to assess knowledge of visual health. The results were eye-opening. With the number of people affected by potentially blinding eye diseases expected to double in the coming years, AAO is urging individuals to fill in key knowledge gaps and address risk factors within their control and asking physicians to help in education efforts. “Medical professionals in Tennessee need to work together to educate our patients that vision loss can also amplify the adverse effects of other illnesses,” said Rebecca Taylor, MD, an ophthalmologist with Saint Thomas West Hospital and Nashville Vision Associates. “Only one in four of those surveyed Dr. Rebecca Taylor knew that vision loss

in adults is associated with psychological problems such as social isolation and depression.” Other key findings from the online survey of more than 3,500 U.S. adults included: • While 83 percent of Tennesseans say they are knowledgeable about eye/ vision health, less than 1 in 5 (19 percent) were able to correctly identify the three main causes of blindness in the U.S., which are glaucoma, age-related macular degeneration (AMD) and diabetic eye disease. • Less than half (47 percent) of respondents nationally were aware that vision loss and blindness do not affect all people equally. • Only around one-third of adults (37 percent) know you do not always experience symptoms before you lose vision to eye diseases. • Less than half (43 percent) of Tennesseans surveyed were aware your brain can make it difficult to know if you are losing your vision by adapting to vision loss. “The discrepancy between what Tennesseans think they know about vision

health compared to what they actually know is alarming,” noted Taylor. “The year 2020 is the perfect time to encourage your patients to see their ophthalmologist for a baseline eye exam.” AAO recommends that healthy adults see an ophthalmologist for a comprehensive, baseline eye exam by age 40 and have their eyes checked every year or two at age 65 or older. Getting ahead of eye issues is critical. “Far too often, we witness the consequences of patients entering the ophthalmologist’s office too late to avoid severe vision loss,” said AAO President Anne L. Coleman, MD, PhD. “In 2020, we want all Americans to have clear vision when it comes to eye health.” Multiple studies have shown people fear vision loss more than many other diseases and serious health problems. The new study shows Americans are scared about an issue they know very little about. Physicians are encouraged to direct patients to ophthalmologist-reviewed information about eye health, diseases and treatment options by going online to AAO.org/EyeSmart.

degree from the University of Memphis. Active in the community, he is a member of Leadership Health Care and is the board president and past treasurer of Rebuilding Together Nashville.

TriStar Southern Hills Names Reed CNO TriStar Southern Hills Medical Center has appointed Laura Reed, MSN, RN, CCRN, NEA-BC, as its chief nursing officer. Reed brings more than 28 years of nursing experience within HCA to her new role.  After beginning her Laura Reed career with HCA as a staff nurse in 1991, Reed moved into leadership roles at Reston Hospital Center where she became vice president of Critical Care Services and Chippenham Hospital where she served as assistant chief nursing officer. Both medical facilities are located in Richmond, Va. Reed holds a Master of Science in Nursing Administration from George Mason University and earned her undergraduate degree from the University of Virginia School of Nursing.

Nalley Named Member at KraftCPAs Scott Nalley, CPA, CISA, CIA, CCSFP, has been named the newest member of KraftCPAs. Nalley is in the Risk Assurance & Advisory Services Practice where his primary focus includes internal audit and internal control consulting projects. Scott Nalley Previously, he worked in the private sector as an internal auditor for Vanderbilt University for six years. He earned his accounting nashvillemedicalnews

Dustin Greene, FACHE, has been appointed CEO of TriStar Skyline Medical Center effective Feb. 1 where he will be responsible for operations of the 278-bed hospital, as well as the 121-bed behavioral health hospital TriStar Skyline Madison and related care ar- Dustin Greene eas serving communities in and around Middle Tennessee and Southern Kentucky. For the past five years, Greene had served in the same role with sister hospital TriStar Horizon Medical Center in Dickson. During his tenure, TriStar Horizon expanded its clinical capabilities through recruitment of key physicians, earned level III trauma designation, opened a Level II Neonatal ICU, expanded interventional cardiology, and opened a free-standing ER at the Natchez campus. Greene’s 18year tenure with HCA Healthcare has included serving as COO at TriStar Skyline Medical Center and as COO at HCA Healthcare’s Eastside Medical Center in the Atlanta area. Greene is a Fellow of the American College of Healthcare Executives. He earned his bachelor’s degree from Samford University and his MBA from Belmont University.

Last month, Tennessee’s Division of TennCare director Gabe Roberts announced he is leaving Tennessee state government to return to the private sector. His anticipated last day will be Monday, March 2, 2020. At press time, Governor Bill Lee had not yet Gabe Roberts named a successor to the position. Roberts’s service in Tennessee state government began in 2013 when he joined TennCare as general counsel. He was promoted to deputy director and chief operating officer in 2016, and Roberts was subsequently appointed as director of TennCare in January 2019 by the governor. During his tenure Roberts has been instrumental in the design and implementation of many of the agency’s initiatives. Most recently under Roberts’s leadership, TennCare submitted two proposals – Tennessee’s Katie Beckett program and Tennessee’s Block Grant plan – which are both pending approval by the federal government.

Mark Your Calendars Our Kids Soup Sunday • February 23 Nissan Stadium Club Level West Celebrating its 27th year, this popular annual event is slated for 11 am-2 pm to benefit the work of Our Kids, which provides medical evaluations and crisis counseling for children and families struggling with child sexual abuse. In addition to delicious offerings by more than 30 local restaurants and caterers, the day features a silent auction, celebrity and culinary judges, activities for children, sweet treats and more. Tickets may be purchased online: $25 for adults and $5 children (ages 4-17). The event will be held inside Club Level West at the stadium with parking in Lot H. For more information or to purchase tickets, go online to OurKidsCenter.org to follow the event link or Eventbrite.com and search for Soup Sunday.

2020 Walk to Cure Arthritis • May 3 & 17 Middle Tennessee State University Murphy Center (May 3) Vanderbilt University Recreation & Wellness Center (May 17) Join forces with other Middle Tennesseans to battle arthritis in the fight for a pain-free future. This year’s combined fundraising goal for the two events tops $160,000. To register, donate or learn more about the 2020 Murfreesboro event, go to Walkto CureArthritis.org/Murfreesboro. For the Nashville event, go to WalktoCureArthritis.org/Nashville.