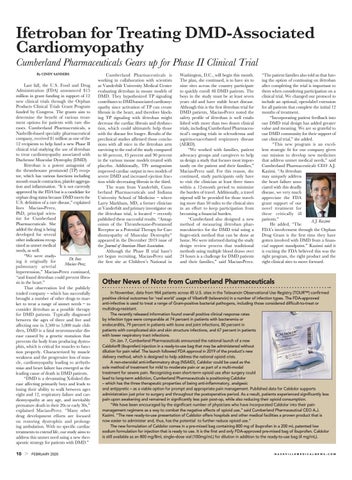 Last fall, the U.S. Food and Drug Administration (FDA) announced $15 million in grant funding in support of 12 new clinical trials through the Orphan Products Clinical Trials Grant Program funded by Congress. The grants aim to determine the benefit of various treatment options for patients with rare diseases. Cumberland Pharmaceuticals, a Nashville-based specialty pharmaceutical company, received $1 million as one of the 12 recipients to help fund a new Phase II clinical trial studying the use of ifetroban to treat cardiomyopathy associated with Duchenne Muscular Dystrophy (DMD). Ifetroban is a potent antagonist of the thromboxane prostanoid (TP) receptor, which has various functions including smooth muscle contraction, platelet aggregation and inflammation. “It is not currently approved by the FDA but is a candidate for orphan drug status because DMD meets the U.S. definition of a rare disease,” explained Ines Macias-Perez, PhD, principal scientist for Cumberland Pharmaceuticals. She added the drug is being developed for several other indications recognized as unmet medical needs, as well. “We were studyDr. Ines ing it originally for Macias-Perez pulmonary arterial hypertension,” Macias-Perez continued, “and found ifetroban could prevent fibrosis in the heart.” That observation led the publicly traded company – which has successfully brought a number of other drugs to market to treat a range of unmet needs – to consider ifetroban as a possible therapy for DMD patients. Typically diagnosed between the ages of three and five and affecting one in 3,500 to 5,000 male children, DMD is a fatal neuromuscular disease caused by a genetic mutation that prevents the body from producing dystrophin, which is critical for muscles to function properly. Characterized by muscle weakness and the progressive loss of muscle, cardiomyopathy leading to arrhythmias and heart failure has emerged as the leading cause of death in DMD patients. “DMD is a devastating X-linked disease affecting primarily boys and leads to losing their ability to walk between ages eight and 12, respiratory failure and cardiomyopathy at any age, and inevitably premature death in their 20s or early 30s,” explained Macias-Perez. “Many other drug development efforts are focused on restoring dystrophin and prolonging ambulation. With no specific cardiac treatments to extend life, our study aims to address this unmet need using a new therapeutic strategy for patients with DMD.” 10

Cumberland Pharmaceuticals is working in collaboration with scientists at Vanderbilt University Medical Center evaluating ifetroban in mouse models of DMD. They hypothesized TP signaling contributes to DMD-associated cardiomyopathy since activation of TP can create fibrosis in the heart, and therefore blocking TP signaling with ifetroban might decrease the cardiac fibrosis and dysfunction, which could ultimately help those with the disease live longer. Results of the preclinical studies affirmed those conclusions with all mice in the ifetroban arm surviving to the end of the study compared to 60 percent, 43 percent and 90 percent in the various mouse models treated with placebo. Additionally, TPr antagonism improved cardiac output in two models of severe DMD and increased ejection fraction while decreasing fibrosis in the third. The team from Vanderbilt, Cumberland Pharmaceuticals and Indiana University School of Medicine – where Larry Markham, MD, a former clinician at Vanderbilt and primary investigator on the ifetroban trial, is located – recently published these successful results. “Antagonism of the Thromboxane-Prostanoid Receptor as a Potential Therapy for Cardiomyopathy of Muscular Dystrophy” appeared in the December 2019 issue of the Journal of American Heart Association. Although the Phase II trial hasn’t yet begun recruiting, Macias-Perez said the first site at Children’s National in

Washington, D.C., will begin this month. The plan, she continued, is to have six to nine sites across the country participate to quickly enroll 48 DMD patients. The boys in the study must be at least seven years old and have stable heart disease. Although this is the first ifetroban trial for DMD patients, Macias-Perez noted the safety profile of ifetroban is well established with more than two dozen clinical trials, including Cumberland Pharmaceutical’s ongoing trials in scleroderma and aspirin-exacerbated respiratory disease (AERD). “We worked with families, patient advocacy groups and caregivers to help us design a study that focuses most importantly on the patient and their families,” Macias-Perez said. For this reason, she continued, study participants only have to visit the clinician at least three times within a 12-month period to minimize the burden of travel. Additionally, a travel stipend will be provided for those traveling more than 50 miles to the clinical sites in an effort to keep participation from becoming a financial burden. “Cumberland also designed a new method of measuring ifetroban pharmacokinetics for the DMD trial using a finger-stick method that can be done at home. We were informed during the study design review process that traditional methods using multiple blood draws over 24 hours is a challenge for DMD patients and their families,” said Macias-Perez.

“The patient families also told us that having the option of continuing on ifetroban after completing the trial is important to them when considering participation on a clinical trial. We changed our protocol to include an optional, open-label extension for all patients that complete the initial 12 months of treatment. “Incorporating patient feedback into our DMD trial design has added greater value and meaning. We are so grateful to our DMD community for their support of our clinical trial,” she added. “This new program is an excellent strategic fit for our company given our mission to develop new medicines that address unmet medical needs,” said Cumberland Pharmaceuticals CEO A.J. Kazimi. “As ifetroban may uniquely address the heart failure associated with this deadly disease, we very much appreciate the FDA grant support of our novel treatment for these critically ill patients.” A.J. Kazimi He added, “The FDA’s involvement through the Orphan Drug Grant is the first time they have gotten involved with DMD from a financial support standpoint.” Kazimi said it is exciting the FDA believed this was the right program, the right product and the right clinical sites to move forward.

Other News of Note from Cumberland Pharmaceuticals In November, data from 964 patients across 45 U.S. sites in the Telavancin Observational Use Registry (TOUR™) confirmed positive clinical outcomes for ‘real world’ usage of Vibativ® (telavancin) in a number of infection types. The FDA-approved anti-infective is used to treat a range of Gram-positive bacterial pathogens, including those considered difficult-to-treat or multidrug-resistant. The recently released information found overall positive clinical response rates by infection type were comparable at 74 percent in patients with bacteremia or endocarditis, 79 percent in patients with bone and joint infections, 80 percent in patients with complicated skin and skin structure infections, and 67 percent in patients with lower respiratory tract infections.  On Jan. 7, Cumberland Pharmaceuticals announced the national launch of a new Caldolor® (ibuprofen) injection in a ready-to-use bag that may be administered without dilution for pain relief. The launch followed FDA approval in 2019 of the product’s new delivery method, which is designed to help address the national opioid crisis. A non-steroidal anti-inflammatory drug (NSAID), Caldolor could be used as the sole method of treatment for mild to moderate pain or as part of a multi-modal treatment for severe pain. Recognizing even short-term opioid use after surgery could lead to long-term addiction, Cumberland Pharmaceuticals is positioning Caldolor – which has the three therapeutic properties of being anti-inflammatory, analgesic and antipyretic – as a viable option for prompt and appropriate pain management. Published data for Caldolor supports administration just prior to surgery and throughout the postoperative period. As a result, patients experienced significantly less pain upon awakening and remained in significantly less pain post-op, while also reducing their opioid consumption. “We have been encouraged by the significant number of physicians who have incorporated Caldolor into their pain management regimens as a way to combat the negative effects of opioid use,” said Cumberland Pharmaceutical CEO A.J. Kazimi. “The new ready-to-use presentation of Caldolor offers hospitals and other medical facilities a proven product that is now easier to administer and, thus, has the potential  to further reduce opioid use.” The new formulation of Caldolor comes in a pre-mixed bag containing 800 mg of ibuprofen in a 200 mL patented low sodium formulation for injection that is ready to use. It is the first and only FDA-approved pre-mixed bag of ibuprofen. Caldolor is still available as an 800 mg/8mL single–dose vial (100mg/mL) for dilution in addition to the ready-to-use bag (4 mg/mL).