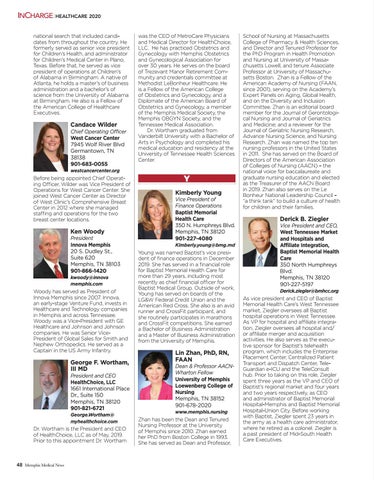 InCharge HEALTHCARE 2020 national search that included candidates from throughout the country. He formerly served as senior vice president for Children’s Health, and administrator for Children’s Medical Center in Plano, Texas. Before that, he served as vice president of operations at Children’s of Alabama in Birmingham. A native of Atlanta, he holds a master’s of business administration and a bachelor’s of science from the University of Alabama at Birmingham. He also is a Fellow of the American College of Healthcare Executives.

Woody has served as President of Innova Memphis since 2007. Innova, an early-stage Venture Fund, invests in Healthcare and Technology companies in Memphis and across Tennessee. Woody was a Vice-President with GE Healthcare and Johnson and Johnson companies. He was Senior VicePresident of Global Sales for Smith and Nephew Orthopedics. He served as a Captain in the US Army Infantry.

Dr. Wortham is the President and CEO of HealthChoice, LLC as of May, 2019. Prior to this appointment Dr. Wortham

Young was named Baptist’s vice president of finance operations in December 2019. She has served in a financial role for Baptist Memorial Health Care for more than 29 years, including most recently as chief financial officer for Baptist Medical Group. Outside of work, Young has served on boards of the LG&W Federal Credit Union and the American Red Cross. She also is an avid runner and CrossFit participant, and she routinely participates in marathons and CrossFit competitions. She earned a Bachelor of Business Administration and a Master of Business Administration from the University of Memphis.

Zhan has been the Dean and Tenured Nursing Professor at the University of Memphis since 2010. Zhan earned her PhD from Boston College in 1993. She has served as Dean and Professor,

School of Nursing at Massachusetts College of Pharmacy & Health Sciences, and Director and Tenured Professor for the PhD Program in Health Promotion and Nursing at University of Massachusetts Lowell, and tenure Associate Professor at University of Massachusetts Boston. Zhan is a Fellow of the American Academy of Nursing (FAAN, since 2001), serving on the Academy’s Expert Panels on Aging, Global Health, and on the Diversity and Inclusion Committee. Zhan is an editorial board member for the Journal of Gerontological Nursing and Journal of Geriatrics and Medicine; and a reviewer for the Journal of Geriatric Nursing Research, Advance Nursing Science, and Nursing Research. Zhan was named the top ten nursing professors in the United States in 2011. She has served on the Board of Directors of the American Association of Colleges of Nursing (AACN) – the national voice for baccalaureate and graduate nursing education and elected as the Treasurer of the AACN Board in 2019. Zhan also serves on the Le Bonheur National Leadership Council – “a think tank” to build a culture of health for children and their families.

As vice president and CEO of Baptist Memorial Health Care’s West Tennessee market, Ziegler oversees all Baptist hospital operations in West Tennessee. As VP for hospital and affiliate integration, Ziegler oversees all hospital and/ or affiliate merger and acquisition activities. He also serves as the executive sponsor for Baptist’s telehealth program, which includes the Enterprise Placement Center, Centralized Patient Transport and Dispatch Center, TeleGuardian e-ICU and the TeleConsult hub. Prior to taking on this role, Ziegler spent three years as the VP and CEO of Baptist’s regional market and four years and two years respectively, as CEO and administrator of Baptist Memorial Hospital-Memphis and Baptist Memorial Hospital-Union City. Before working with Baptist, Ziegler spent 23 years in the army as a health care administrator, where he retired as a colonel. Ziegler is a past president of Mid-South Health Care Executives.