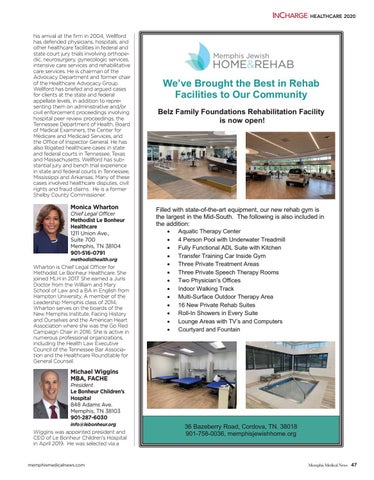 InCharge HEALTHCARE 2020 his arrival at the firm in 2004, Wellford has defended physicians, hospitals, and other healthcare facilities in federal and state court jury trials involving orthope dic, neurosurgery, gynecologic services, intensive care services and rehabilitative care services. He is chairman of the Advocacy Department and former chair of the Healthcare Advocacy Group. Wellford has briefed and argued cases for clients at the state and federal appellate levels, in addition to representing them on administrative and/or civil enforcement proceedings involving hospital peer review proceedings, the Tennessee Department of Health, Board of Medical Examiners, the Center for Medicare and Medicaid Services, and the Office of Inspector General. He has also litigated healthcare cases in state and federal courts in Tennessee, Texas and Massachusetts. Wellford has substantial jury and bench trial experience in state and federal courts in Tennessee, Mississippi and Arkansas. Many of these cases involved healthcare disputes, civil rights and fraud claims. He is a former Shelby County Commissioner.

Wharton is Chief Legal Officer for Methodist Le Bonheur Healthcare. She joined MLH in 2017. She earned a Juris Doctor from the William and Mary School of Law and a BA in English from Hampton University. A member of the Leadership Memphis class of 2014, Wharton serves on the boards of the New Memphis Institute, Facing History and Ourselves and the American Heart Association where she was the Go Red Campaign Chair in 2016. She is active in numerous professional organizations, including the Health Law Executive Council of the Tennessee Bar Association and the Healthcare Roundtable for General Counsel.

Wiggins was appointed president and CEO of Le Bonheur Childrenâ&#x20AC;&#x2122;s Hospital in April 2019.Â Â He was selected via a