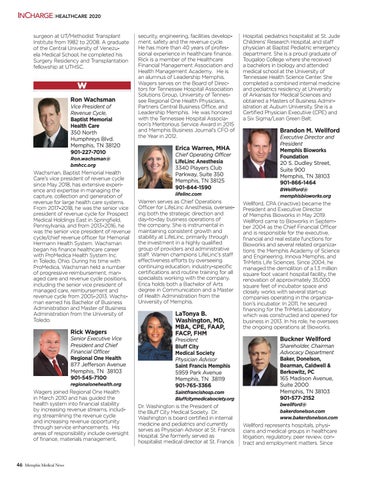 InCharge HEALTHCARE 2020 surgeon at UT/Methodist Transplant Institute from 1982 to 2008. A graduate of the Central University of Venezuela Medical School, he completed his Surgery Residency and Transplantation fellowship at UTHSC.

Wagers joined Regional One Health in March 2010 and has guided the health system into financial stability by increasing revenue streams, including streamlining the revenue cycle and increasing revenue opportunity through service enhancements. His areas of responsibility include oversight of finance, materials management,

security, engineering, facilities development, safety and the revenue cycle. He has more than 40 years of professional experience in healthcare finance. Rick is a member of the Healthcare Financial Management Association and Health Management Academy. He is an alumnus of Leadership Memphis. Wagers serves on the Board of Directors for Tennessee Hospital Association Solutions Group, University of Tennessee Regional One Health Physicians, Partners Central Business Office, and Leadership Memphis. He was honored with the Tennessee Hospital Association’s Meritorious Service Award in 2015 and Memphis Business Journal’s CFO of the Year in 2012.

Warren serves as Chief Operations Officer for LifeLinc Anesthesia, overseeing both the strategic direction and day-to-day business operations of the company. She is instrumental in maintaining consistent growth and stability at LifeLinc, primarily through the investment in a highly qualified group of providers and administrative staff. Warren champions LifeLinc’s staff effectiveness efforts by overseeing continuing education, industry-specific certifications and routine training for all specialists working with the company. Erica holds both a Bachelor of Arts degree in Communication and a Master of Health Administration from the University of Memphis.

Hospital, pediatrics hospitalist at St. Jude Childrens’ Research Hospital, and staff physician at Baptist Pediatric emergency department. She is a proud graduate of Tougaloo College where she received a bachelors in biology and attended medical school at the University of Tennessee Health Science Center. She completed a combined internal medicine and pediatrics residency at University of Arkansas for Medical Sciences and obtained a Masters of Business Administration at Auburn University. She is a Certified Physician Executive (CPE) and a Six Sigma/Lean Green Belt.

Wellford, CPA (inactive) became the President and Executive Director of Memphis Bioworks in May 2019. Wellford came to Bioworks in September 2004 as the Chief Financial Officer and is responsible for the executive, financial and real estate functions for Bioworks and several related organizations: the Memphis Academy of Science and Engineering, Innova Memphis, and TriMetis Life Sciences. Since 2004, he managed the demolition of a 1.3 million square foot vacant hospital facility, the renovation of approximately 35,000 square feet of incubator space and closely works with several start-up companies operating in the organization’s incubator. In 2011, he secured financing for the TriMetis Laboratory which was constructed and opened for business in 2013. In his role, he oversees the ongoing operations at Bioworks.