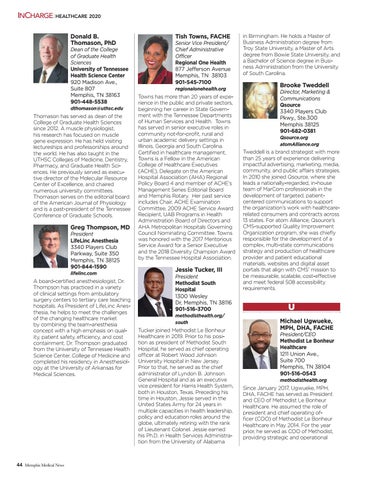 Thomason has served as dean of the College of Graduate Health Sciences since 2012. A muscle physiologist, his research has focused on muscle gene expression. He has held visiting lectureships and professorships around the world. He has also taught in the UTHSC Colleges of Medicine, Dentistry, Pharmacy, and Graduate Health Sciences. He previously served as executive director of the Molecular Resource Center of Excellence, and chaired numerous university committees. Thomason serves on the editorial board of the American Journal of Physiology and is a past-president of the Tennessee Conference of Graduate Schools.

A board-certified anesthesiologist, Dr. Thompson has practiced in a variety of clinical settings from ambulatory surgery centers to tertiary care teaching hospitals. As President of LifeLinc Anesthesia, he helps to meet the challenges of the changing healthcare market by combining the team-anesthesia concept with a high emphasis on quality, patient safety, efficiency, and cost containment. Dr. Thompson graduated from the University of Tennessee Health Science Center, College of Medicine and completed his residency in Anesthesiology at the University of Arkansas for Medical Sciences.

Towns has more than 20 years of experience in the public and private sectors, beginning her career in State Government with the Tennessee Departments of Human Services and Health. Towns has served in senior executive roles in community not-for-profit, rural and urban academic delivery settings in Illinois, Georgia and South Carolina.  Certified in healthcare management, Towns is a Fellow in the American College of Healthcare Executives (ACHE), Delegate on the American Hospital Association (AHA) Regional Policy Board 4 and member of ACHE’s Management Series Editorial Board and Memphis Rotary.  Her past service includes Chair, ACHE Examination Committee, 2009 ACHE Service Award Recipient, UAB Programs in Health Administration Board of Directors and AHA Metropolitan Hospitals Governing Council Nominating Committee. Towns was honored with the 2017 Meritorious Service Award for a Senior Executive and the 2018 Diversity Champion Award by the Tennessee Hospital Association.

Tucker joined Methodist Le Bonheur Healthcare in 2019. Prior to his position as president of Methodist South Hospital, he served as chief operating officer at Robert Wood Johnson University Hospital in New Jersey. Prior to that, he served as the chief administrator of Lyndon B. Johnson General Hospital and as an executive vice president for Harris Health System, both in Houston, Texas. Preceding his time in Houston, Jessie served in the United States Army for 24 years in multiple capacities in health leadership, policy and education roles around the globe, ultimately retiring with the rank of Lieutenant Colonel. Jessie earned his Ph.D. in Health Services Administration from the University of Alabama

Tweddell is a brand strategist with more than 25 years of experience delivering impactful advertising, marketing, media, community, and public affairs strategies. In 2010 she joined Qsource, where she leads a nationally-regarded, in-house team of MarCom professionals in the development of targeted, patientcentered communications to support the organization’s work with healthcarerelated consumers and contracts across 13 states. For atom Alliance, Qsource’s CMS-supported Quality Improvement Organization program, she was chiefly responsible for the development of a complex, multi-state communications strategy and production of healthcare provider and patient educational materials, websites and digital asset portals that align with CMS’ mission to be measurable, scalable, cost-effective and meet federal 508 accessibility requirements.