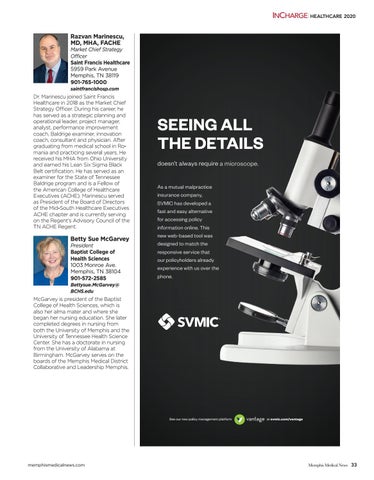 Dr. Marinescu joined Saint Francis Healthcare in 2018 as the Market Chief Strategy Officer. During his career, he has served as a strategic planning and operational leader, project manager, analyst, performance improvement coach, Baldrige examiner, innovation coach, consultant and physician. After graduating from medical school in Romania and practicing several years, He received his MHA from Ohio University and earned his Lean Six Sigma Black Belt certification. He has served as an examiner for the State of Tennessee Baldrige program and is a Fellow of the American College of Healthcare Executives (ACHE). Marinescu served as President of the Board of Directors of the Mid-South Healthcare Executives ACHE chapter and is currently serving on the Regent’s Advisory Council of the TN ACHE Regent.

SEEING ALL THE DETAILS doesn’t always require a microscope. As a mutual malpractice insurance company, SVMIC has developed a fast and easy alternative for accessing policy information online. This new web-based tool was designed to match the responsive service that our policyholders already experience with us over the phone.