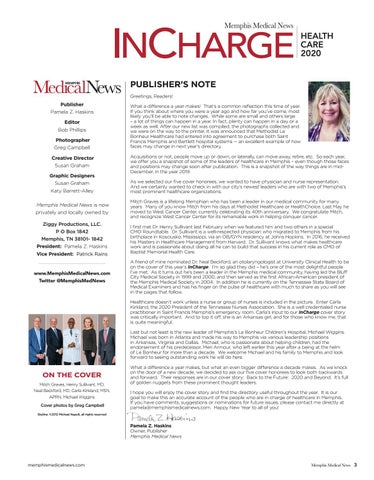 What a difference a year makes! That’s a common reflection this time of year. If you think about where you were a year ago and how far you’ve come, most likely you’ll be able to note changes.  While some are small and others large – a lot of things can happen in a year. In fact, plenty can happen in a day or a week as well. After our new list was compiled, the photographs collected and we were on the way to the printer, it was announced that Methodist Le Bonheur Healthcare had entered into agreement to purchase both Saint Francis Memphis and Bartlett hospital systems -- an excellent example of how faces may change in next year’s directory. Acquisitions or not, people move up or down, or laterally, can move away, retire, etc.  So each year, we offer you a snapshot of some of the leaders of healthcare in Memphis – even though those faces and positions may change soon after publication.  This is a snapshot of the way things are in midDecember, in the year 2019.  As we selected our five cover honorees, we wanted to have physician and nurse representation.  And we certainly wanted to check in with our city’s newest leaders who are with two of Memphis’s most prominent healthcare organizations.

Memphis Medical News is now privately and locally owned by

Mitch Graves is a lifelong Memphian who has been a leader in our medical community for many years. Many of you know Mitch from his days at Methodist Healthcare or HealthChoice. Last May he moved to West Cancer Center, currently celebrating its 40th anniversary. We congratulate Mitch, and recognize West Cancer Center for its remarkable work in helping conquer cancer.

I first met Dr. Henry Sullivant last February when we featured him and two others in a special CMO Roundtable. Dr. Sullivant is a well-respected physician who migrated to Memphis from his birthplace in Kosciusko, Mississippi, via an OB/GYN residency at Johns Hopkins. In 2016, he received his Masters in Healthcare Management from Harvard. Dr. Sullivant knows what makes healthcare work and is passionate about doing all he can to build that success in his current role as CMO of Baptist Memorial Health Care.

A friend of mine nominated Dr. Neal Beckford, an otolaryngologist at University Clinical Health to be on the cover of this year’s InCharge. I’m so glad they did – he’s one of the most delightful people I’ve met. As it turns out he’s been a leader in the Memphis medical community, having led the Bluff City Medical Society in 1999 and 2000, and then served as the first African-American president of the Memphis Medical Society in 2004. In addition he is currently on the Tennessee State Board of Medical Examiners and has his finger on the pulse of healthcare with much to share as you will see in the pages that follow. Healthcare doesn’t work unless a nurse or group of nurses is included in the picture. Enter Carla Kirkland, the 2020 President of the Tennessee Nurses Association. She is a well credentialed nurse practitioner in Saint Francis Memphis’s emergency room. Carla’s input to our InCharge cover story was critically important. And to top it off, she is an Arkansas girl, and for those who know me, that is quite meaningful. Last but not least is the new leader of Memphis’s Le Bonheur Children’s Hospital, Michael Wiggins. Michael was born in Atlanta and made his way to Memphis via various leadership positions in Arkansas, Virginia and Dallas. Michael, who is passionate about helping children, had the endorsement of his predecessor, Meri Armour, who left earlier this year after a being at the helm of Le Bonheur for more than a decade. We welcome Michael and his family to Memphis and look forward to seeing outstanding work he will do here.

What a difference a year makes, but what an even bigger difference a decade makes. As we knock on the door of a new decade, we decided to ask our five cover honorees to look both backwards and forward. Their responses are in our cover story: Back to the Future: 2020 and Beyond. It’s full of golden nuggets from these prominent thought leaders. I hope you will enjoy the cover story and find the directory useful throughout the year. It is our goal to make this an accurate account of the people who are in charge of healthcare in Memphis. If you have comments, suggestions or nominations for future issues, please contact me directly at pamela@memphismedicalnews.com. Happy New Year to all of you!