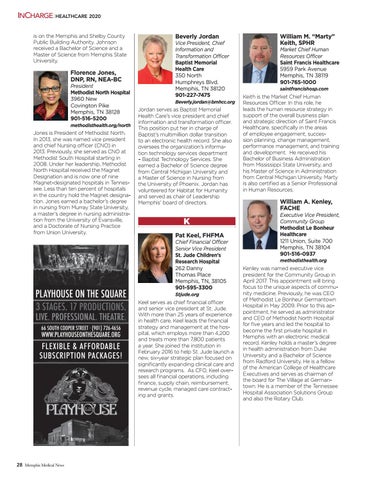 InCharge HEALTHCARE 2020 is on the Memphis and Shelby County Public Building Authority. Johnson received a Bachelor of Science and a Master of Science from Memphis State University.

Jones is President of Methodist North. In 2013, she was named vice president and chief Nursing officer (CNO) in 2013. Previously, she served as CNO at Methodist South Hospital starting in 2008. Under her leadership, Methodist North Hospital received the Magnet Designation and is now one of nine Magnet-designated hospitals in Tennessee. Less than ten percent of hospitals in the country hold the Magnet designation. Jones earned a bachelor’s degree in nursing from Murray State University, a master’s degree in nursing administration from the University of Evansville, and a Doctorate of Nursing Practice from Union University.

Keith is the Market Chief Human Beverly.jordan@bmhcc.org       Resources Officer. In this role, he leads the human resource strategy in Jordan serves as Baptist Memorial support of the overall business plan Health Care’s vice president and chief and strategic direction of Saint Francis information and transformation officer. Healthcare, specifically in the areas This position put her in charge of of employee engagement, succesBaptist’s multimillion dollar transition sion planning, change management, to an electronic health record. She also performance management, and training oversees the organization’s informaand development.  He received his tion technology services department Bachelor of Business Administration – Baptist Technology Services. She from Mississippi State University, and earned a Bachelor of Science degree his Master of Science in Administration from Central Michigan University and from Central Michigan University. Marty a Master of Science in Nursing from is also certified as a Senior Professional the University of Phoenix. Jordan has in Human Resources. volunteered for Habitat for Humanity and served as chair of Leadership William A. Kenley, Memphis’ board of directors.

Keel serves as chief financial officer and senior vice president at St. Jude. With more than 25 years of experience in health care, Keel leads the financial strategy and management at the hospital, which employs more than 4,200 and treats more than 7,800 patients a year. She joined the institution in February 2016 to help St. Jude launch a new, six-year strategic plan focused on significantly expanding clinical care and research programs. As CFO, Keel oversees all financial operations, including finance, supply chain, reimbursement, revenue cycle, managed care contracting and grants.

Kenley was named executive vice president for the Community Group in April 2017. This appointment will bring focus to the unique aspects of community medicine. Previously, he was CEO of Methodist Le Bonheur Germantown Hospital in May 2009. Prior to this appointment, he served as administrator and CEO of Methodist North Hospital for five years and led the hospital to become the first private hospital in Memphis with an electronic medical record. Kenley holds a master’s degree in health administration from Duke University and a Bachelor of Science from Radford University. He is a fellow of the American College of Healthcare Executives and serves as chairman of the board for The Village at Germantown. He is a member of the Tennessee Hospital Association Solutions Group and also the Rotary Club.