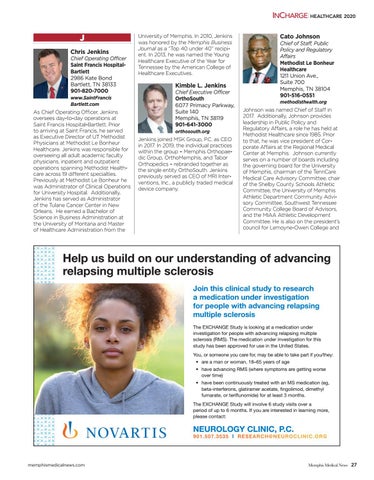 As Chief Operating Officer, Jenkins oversees day-to-day operations at Saint Francis Hospital-Bartlett. Prior to arriving at Saint Francis, he served as Executive Director of UT Methodist Physicians at Methodist Le Bonheur Healthcare. Jenkins was responsible for overseeing all adult academic faculty physicians, inpatient and outpatient operations spanning Methodist Healthcare across 19 different specialties. Previously at Methodist Le Bonheur he was Administrator of Clinical Operations for University Hospital. Additionally, Jenkins has served as Administrator of the Tulane Cancer Center in New Orleans. He earned a Bachelor of Science in Business Administration at the University of Montana and Master of Healthcare Administration from the

Johnson was named Chief of Staff in 2017. Additionally, Johnson provides leadership in Public Policy and Regulatory Affairs, a role he has held at Methodist Healthcare since 1985. Prior to that, he was vice president of Corporate Affairs at the Regional Medical Center at Memphis. Johnson currently serves on a number of boards including the governing board for the University of Memphis, chairman of the TennCare Medical Care Advisory Committee, chair of the Shelby County Schools Athletic Committee, the University of Memphis Athletic Department Community Advisory Committee, Southwest Tennessee Community College Board of Advisors, and the MIAA Athletic Development Committee. He is also on the president’s council for Lemoyne-Owen College and