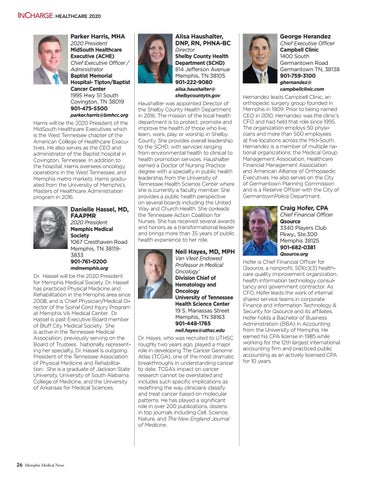 Harris will be the 2020 President of the MidSouth Healthcare Executives which is the West Tennessee chapter of the American College of Healthcare Executives. He also serves as the CEO and administrator of the Baptist hospital in Covington, Tennessee. In addition to the hospital, Harris oversees oncology operations in the West Tennessee, and Memphis metro markets. Harris graduated from the University of Memphis’s Masters of Healthcare Administration program in 2016.

Dr. Hassel will be the 2020 President for Memphis Medical Society. Dr. Hassel has practiced Physical Medicine and Rehabilitation in the Memphis area since 2008, and is Chief Physician/Medical Director of the Spinal Cord Injury Program at Memphis VA Medical Center.  Dr. Hassel is past Executive Board member of Bluff City Medical Society.  She is active in the Tennessee Medical Association, previously serving on the Board of Trustees.  Nationally representing her specialty, Dr. Hassel is outgoing President of the Tennessee Association of Physical Medicine and Rehabilitation.  She is a graduate of Jackson State University, University of South Alabama College of Medicine, and the University of Arkansas for Medical Sciences.

Haushalter was appointed Director of the Shelby County Health Department in 2016. The mission of the local health department is to protect, promote and improve the health of those who live, learn, work, play or worship in Shelby County. She provides overall leadership to the SCHD, with services ranging from environmental health to clinical to health promotion services. Haushalter earned a Doctor of Nursing Practice degree with a specialty in public health leadership from the University of Tennessee Health Science Center where she is currently a faculty member. She provides a public health perspective on several boards including the United Way and Church Health. She co-leads the Tennessee Action Coalition for Nurses. She has received several awards and honors as a transformational leader and brings more than 35 years of public health experience to her role.

Dr. Hayes, who was recruited to UTHSC roughly two years ago, played a major role in developing The Cancer Genome Atlas (TCGA), one of the most dramatic breakthroughs in understanding cancer to date. TCGA’s impact on cancer research cannot be overstated and includes such specific implications as redefining the way clinicians classify and treat cancer based on molecular patterns. He has played a significant role in over 200 publications, dozens in top journals including Cell, Science, Nature, and The New England Journal of Medicine.

Hernandez leads Campbell Clinic, an orthopedic surgery group founded in Memphis in 1909. Prior to being named CEO in 2010, Hernandez was the clinic’s CFO and had held that role since 1995. The organization employs 50 physicians and more than 500 employees at five locations across the Mid-South. Hernandez is a member of multiple national organizations: the Medical Group Management Association, Healthcare Financial Management Association and American Alliance of Orthopaedic Executives. He also serves on the City of Germantown Planning Commission and is a Reserve Officer with the City of GermantownPolice Department.

Hofer is Chief Financial Officer for Qsource, a nonprofit, 501(c)(3) healthcare quality improvement organization, health information technology consultancy and government contractor. As CFO, Hofer leads the work of internal shared service teams in corporate Finance and Information Technology & Security for Qsource and its affiliates. Hofer holds a Bachelor of Business Administration (BBA) in Accounting from the University of Memphis. He earned his CPA license in 1985 while working for the 12th largest international accounting firm and practiced public accounting as an actively licensed CPA for 10 years.