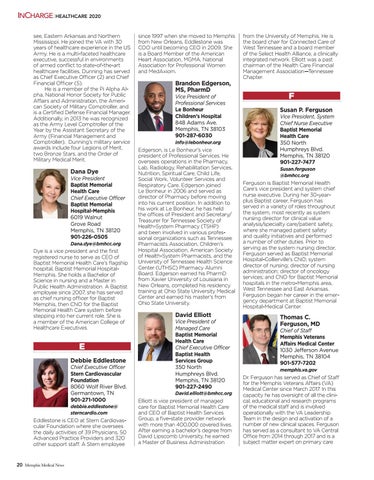 InCharge HEALTHCARE 2020 see, Eastern Arkansas and Northern Mississippi. He joined the VA with 30 years of healthcare experience in the US Army. He is a multi-faceted healthcare executive, successful in environments of armed conflict to state-of-the-art healthcare facilities. Dunning has served as Chief Executive Officer (2) and Chief Financial Officer (5). He is a member of the Pi Alpha Alpha, National Honor Society for Public Affairs and Administration, the American Society of Military Comptroller, and is a Certified Defense Financial Manager. Additionally, in 2013 he was recognized as the Army Level Comptroller of the Year by the Assistant Secretary of the Army (Financial Management and Comptroller). Dunning’s military service awards include four Legions of Merit, two Bronze Stars, and the Order of Military Medical Merit.

Eddlestone is CEO at Stern Cardiovascular Foundation where she oversees the daily activities of 39 Physicians, 50 Advanced Practice Providers and 320 other support staff. A Stern employee

since 1997 when she moved to Memphis from New Orleans, Eddlestone was COO until becoming CEO in 2009. She is a Board Member of the American Heart Association, MGMA, National Association for Professional Women and MedAxiom.

Edgerson, is Le Bonheur’s vice president of Professional Services. He oversees operations in the Pharmacy, Lab, Radiology, Rehabilitation Services, Nutrition, Spiritual Care, Child Life, Social Work, Volunteer Services and Respiratory Care. Edgerson joined Le Bonheur in 2006 and served as director of Pharmacy before moving into his current position. In addition to his work at Le Bonheur, he has held the offices of President and Secretary/ Treasurer for Tennessee Society of Health-System Pharmacy (TSHP) and been involved in various professional organizations such as Tennessee Pharmacists Association, Children’s Hospital Association, American Society of Health-System Pharmacists, and the University of Tennessee Health Science Center (UTHSC) Pharmacy Alumni Board. Edgerson earned his PharmD from Xavier University of Louisiana in New Orleans, completed his residency training at Ohio State University Medical Center and earned his master’s from Ohio State University.

from the University of Memphis. He is the board chair for Connected Care of West Tennessee and a board member of the Select Health Alliance, a clinically integrated network. Elliott was a past chairman of the Health Care Financial Management Association—Tennessee Chapter.

Ferguson is Baptist Memorial Health Care’s vice president and system chief nurse executive. During her 30-yearplus Baptist career, Ferguson has served in a variety of roles throughout the system, most recently as system nursing director for clinical value analysis/specialty care/patient safety, where she managed patient safety and quality initiatives and performed a number of other duties. Prior to serving as the system nursing director, Ferguson served as Baptist Memorial Hospital-Collierville’s CNO; system director of nursing; director of nursing administration; director of oncology services; and CNO for Baptist Memorial hospitals in the metro-Memphis area, West Tennessee and East Arkansas. Ferguson began her career in the emergency department at Baptist Memorial Hospital-Medical Center.

Dr. Ferguson has served as Chief of Staff for the Memphis Veterans Affairs (VA) Medical Center since March 2017. In this David.elliott@bmhcc.org          capacity he has oversight of all the clinical, educational and research programs Elliott is vice president of managed of the medical staff and is involved care for Baptist Memorial Health Care operationally with the VA Leadership and CEO of Baptist Health Services Team in the design and activation of a Group, a five-state provider network number of new clinical spaces. Ferguson with more than 400,000 covered lives. has served as a consultant to VA Central After earning a bachelor’s degree from Office from 2014 through 2017 and is a David Lipscomb University, he earned subject matter expert on primary care a Master of Business Administration