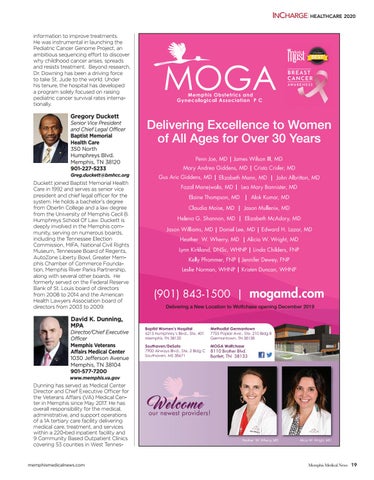 InCharge HEALTHCARE 2020 information to improve treatments. He was instrumental in launching the Pediatric Cancer Genome Project, an ambitious sequencing effort to discover why childhood cancer arises, spreads and resists treatment. Beyond research, Dr. Downing has been a driving force to take St. Jude to the world. Under his tenure, the hospital has developed a program solely focused on raising pediatric cancer survival rates internationally.

Duckett joined Baptist Memorial Health Care in 1992 and serves as senior vice president and chief legal officer for the system. He holds a bachelor’s degree from Oberlin College and a law degree from the University of Memphis Cecil B. Humphreys School Of Law. Duckett is deeply involved in the Memphis community, serving on numerous boards, including the Tennessee Election Commission, MIFA, National Civil Rights Museum, Tennessee Board of Regents, AutoZone Liberty Bowl, Greater Memphis Chamber of Commerce Foundation, Memphis River Parks Partnership, along with several other boards. He formerly served on the Federal Reserve Bank of St. Louis board of directors from 2008 to 2014 and the American Health Lawyers Association board of directors from 2003 to 2009.

Delivering Excellence to Women of All Ages for Over 30 Years

Delivering Excellence to Women of All Ages for Over 30 Years

Dunning has served as Medical Center Director and Chief Executive Officer for the Veterans Affairs (VA) Medical Center in Memphis since May 2017. He has overall responsibility for the medical, administrative, and support operations of a 1A tertiary care facility delivering medical care, treatment, and services within a 220-bed inpatient facility and 9 Community Based Outpatient Clinics covering 53 counties in West Tennes-