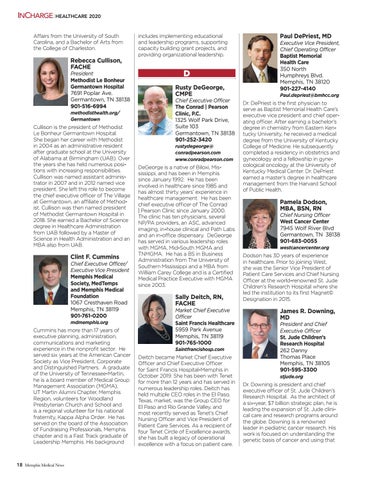 InCharge HEALTHCARE 2020 Affairs from the University of South Carolina, and a Bachelor of Arts from the College of Charleston.

Cullison is the president of Methodist Le Bonheur Germantown Hospital. She began her career with Methodist in 2004 as an administrative resident after graduate school at the University of Alabama at Birmingham (UAB). Over the years she has held numerous positions with increasing responsibilities. Cullison was named assistant administrator in 2007 and in 2012 named vice president. She left this role to become the chief executive officer of The Village at Germantown, an affiliate of Methodist. Cullison was then named president of Methodist Germantown Hospital in 2018. She earned a Bachelor of Science degree in Healthcare Administration from UAB followed by a Master of Science in Health Administration and an MBA also from UAB.

Cummins has more than 17 years of executive planning, administration, communications and marketing experience in the nonprofit sector. He served six years at the American Cancer Society as Vice President, Corporate and Distinguished Partners.  A graduate of the University of Tennessee-Martin, he is a board member of Medical Group Management Association (MGMA), UT Martin Alumni Chapter, Memphis Region, volunteers for Woodland Presbyterian Church and School and is a regional volunteer for his national fraternity, Kappa Alpha Order.  He has served on the board of the Association of Fundraising Professionals, Memphis chapter and is a Fast Track graduate of Leadership Memphis. His background

DeGeorge is a native of Biloxi, Mississippi, and has been in Memphis since January 1992. He has been involved in healthcare since 1985 and has almost thirty years’ experience in healthcare management.  He has been chief executive officer of The Conrad | Pearson Clinic since January 2000.  The clinic has ten physicians, several NP/PA providers, an ASC, advanced imaging, in-house clinical and Path Labs and an in-office dispensary.  DeGeorge has served in various leadership roles with MGMA, Mid-South MGMA and TNMGMA.  He has a BS in Business Administration from The University of Southern Mississippi and a MBA from William Carey College and is a Certified Medical Practice Executive with MGMA since 2003.

Deitch became Market Chief Executive Officer and Chief Executive Officer for Saint Francis Hospital-Memphis in October 2019. She has been with Tenet for more than 12 years and has served in numerous leadership roles. Deitch has held multiple CEO roles in the El Paso, Texas, market, was the Group CEO for El Paso and Rio Grande Valley, and most recently served as Tenet’s Chief Nursing Officer and Vice President of Patient Care Services. As a recipient of four Tenet Circle of Excellence awards, she has built a legacy of operational excellence with a focus on patient care.

Dr. DePriest is the first physician to serve as Baptist Memorial Health Care’s executive vice president and chief operating officer. After earning a bachelor’s degree in chemistry from Eastern Kentucky University, he received a medical degree from the University of Kentucky College of Medicine. He subsequently completed a residency in obstetrics and gynecology and a fellowship in gynecological oncology at the University of Kentucky Medical Center. Dr. DePriest earned a master’s degree in healthcare management from the Harvard School of Public Health.

Dodson has 30 years of experience in healthcare. Prior to joining West, she was the Senior Vice President of Patient Care Services and Chief Nursing Officer at the world-renowned St. Jude Children’s Research Hospital where she led the institution to its first Magnet© Designation in 2015.

Dr. Downing is president and chief executive officer of St. Jude Children’s Research Hospital. As the architect of a six-year, $7 billion strategic plan, he is leading the expansion of St. Jude clinical care and research programs around the globe. Downing is a renowned leader in pediatric cancer research. His work is focused on understanding the genetic basis of cancer and using that