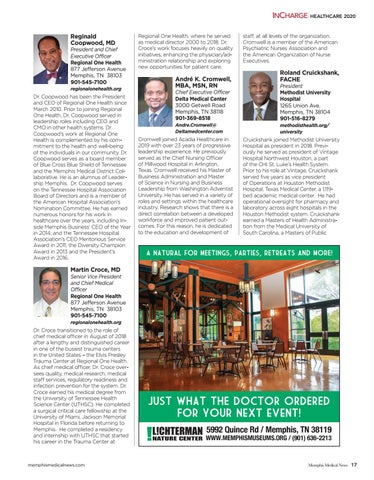 Dr. Coopwood has been the President and CEO of Regional One Health since March 2010. Prior to joining Regional One Health, Dr. Coopwood served in leadership roles including CEO and CMO in other health systems. Dr. Coopwood’s work at Regional One Health is complemented by his commitment to the health and well-being of the individuals in our community. Dr. Coopwood serves as a board member of Blue Cross Blue Shield of Tennessee and the Memphis Medical District Collaborative. He is an alumnus of Leadership Memphis. Dr. Coopwood serves on the Tennessee Hospital Association Board of Directors and is a member of the American Hospital Association’s Nomination Committee. He has earned numerous honors for his work in healthcare over the years, including Inside Memphis Business’ CEO of the Year in 2014; and the Tennessee Hospital Association’s CEO Meritorious Service Award in 2011, the Diversity Champion Award in 2013 and the President’s Award in 2016.

Regional One Health, where he served as medical director 2000 to 2018. Dr. Croce’s work focuses heavily on quality initiatives, enhancing the physician/administration relationship and exploring new opportunities for patient care.

Cromwell joined Acadia Healthcare in 2019 with over 23 years of progressive leadership experience. He previously served as the Chief Nursing Officer of Millwood Hospital in Arlington, Texas. Cromwell received his Master of Business Administration and Master of Science in Nursing and Business Leadership from Washington Adventist University. He has served in a variety of roles and settings within the healthcare industry. Research shows that there is a direct correlation between a developed workforce and improved patient outcomes. For this reason, he is dedicated to the education and development of

staff, at all levels of the organization. Cromwell is a member of the American Psychiatric Nurses Association and the American Organization of Nurse Executives.

Cruickshank joined Methodist University Hospital as president in 2018. Previously he served as president of Vintage Hospital Northwest Houston, a part of the CHI St. Luke’s Health System. Prior to his role at Vintage, Cruickshank served five years as vice president of Operations at Houston Methodist Hospital, Texas Medical Center, a 1,119bed academic medical center. He had operational oversight for pharmacy and laboratory across eight hospitals in the Houston Methodist system. Cruickshank earned a Masters of Health Administration from the Medical University of South Carolina, a Masters of Public

A natural for mEEtings, parties, rEtreats and morE!

Dr. Croce transitioned to the role of chief medical officer in August of 2018 after a lengthy and distinguished career in one of the busiest trauma centers in the United States – the Elvis Presley Trauma Center at Regional One Health. As chief medical officer, Dr. Croce oversees quality, medical research, medical staff services, regulatory readiness and infection prevention for the system. Dr. Croce earned his medical degree from the University of Tennessee Health Science Center (UTHSC). He completed a surgical critical care fellowship at the University of Miami, Jackson Memorial Hospital in Florida before returning to Memphis. He completed a residency and internship with UTHSC that started his career in the Trauma Center at