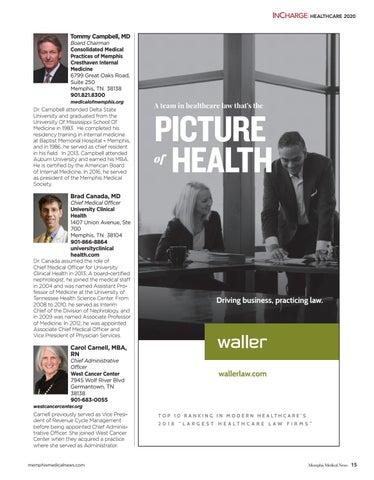 Dr. Campbell attended Delta State University and graduated from the University Of Mississippi School Of Medicine in 1983. He completed his residency training in internal medicine at Baptist Memorial Hospital – Memphis, and in 1986, he served as chief resident in his field. In 2013, Campbell attended Auburn University and earned his MBA. He is certified by the American Board of Internal Medicine. In 2016, he served as president of the Memphis Medical Society.

A team in healthcare law that’s the

Chief Medical Officer University Clinical Health 1407 Union Avenue, Ste 700 Memphis, TN 38104 901-866-8864 universityclinical health.com Dr. Canada assumed the role of Chief Medical Officer for University Clinical Health in 2013. A board-certified nephrologist, he joined the medical staff in 2004 and was named Assistant Professor of Medicine at the University of Tennessee Health Science Center. From 2008 to 2010, he served as Interim Chief of the Division of Nephrology, and in 2009 was named Associate Professor of Medicine. In 2012, he was appointed Associate Chief Medical Officer and Vice President of Physician Services.

Carnell previously served as Vice President of Revenue Cycle Management before being appointed Chief Administrative Officer. She joined West Cancer Center when they acquired a practice where she served as Administrator.