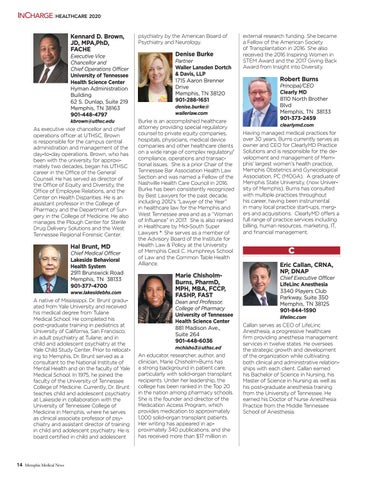 As executive vice chancellor and chief operations officer at UTHSC, Brown is responsible for the campus central administration and management of the day-to-day operations. Brown, who has been with the university for approximately two decades, began his UTHSC career in the Office of the General Counsel. He has served as director of the Office of Equity and Diversity, the Office of Employee Relations, and the Center on Health Disparities. He is an assistant professor in the College of Pharmacy and the Department of Surgery in the College of Medicine. He also manages the Plough Center for Sterile Drug Delivery Solutions and the West Tennessee Regional Forensic Center.

psychiatry by the American Board of Psychiatry and Neurology.

Burke is an accomplished healthcare attorney providing special regulatory counsel to private equity companies, hospitals, physicians, medical device companies and other healthcare clients on a wide range of complex regulatory/ compliance, operations and transactional issues.  She is a prior Chair of the Tennessee Bar Association Health Law Section and was named a Fellow of the Nashville Health Care Council in 2016.  Burke has been consistently recognized by Best Lawyers for the past decade, including 2012’s “Lawyer of the Year” in healthcare law for the Memphis and West Tennessee area and as a “Woman of Influence” in 2017.  She is also ranked in Healthcare by Mid-South Super Lawyers ®. She serves as a member of the Advisory Board of the Institute for Health Law & Policy at the University of Memphis Cecil C. Humphreys School of Law and the Common Table Health Alliance.

An educator, researcher, author, and clinician, Marie Chisholm-Burns has a strong background in patient care, particularly with solid-organ transplant recipients. Under her leadership, the college has been ranked in the Top 20 in the nation among pharmacy schools. She is the founder and director of the Medication Access Program, which provides medication to approximately 1,000 solid-organ transplant patients. Her writing has appeared in approximately 340 publications, and she has received more than $17 million in

external research funding. She became a Fellow of the American Society of Transplantation in 2016. She also received the 2016 Inspiring Women in STEM Award and the 2017 Giving Back Award from Insight into Diversity.

Having managed medical practices for over 30 years, Burns currently serves as owner and CEO for ClearlyMD Practice Solutions and is responsible for the development and management of Memphis’ largest women’s health practice, Memphis Obstetrics and Gynecological Association, PC (MOGA). A graduate of Memphis State University, (now University of Memphis), Burns has consulted with multiple practices throughout his career, having been instrumental in many local practice start-ups, mergers and acquisitions.  ClearlyMD offers a full range of practice services including billing, human resources, marketing, IT, and financial management.

Callan serves as CEO of LifeLinc Anesthesia, a progressive healthcare firm providing anesthesia management services in twelve states. He oversees the strategic growth and development of the organization while cultivating both clinical and administrative relationships with each client. Callan earned his Bachelor of Science in Nursing, his Master of Science in Nursing as well as his post-graduate anesthesia training from the University of Tennessee. He earned his Doctor of Nurse Anesthesia Practice from the Middle Tennessee School of Anesthesia.