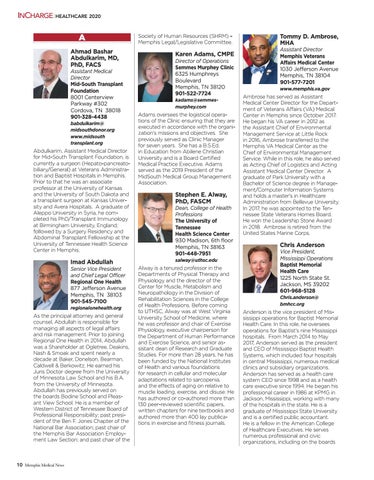 As the principal attorney and general counsel, Abdullah is responsible for managing all aspects of legal affairs and risk management. Prior to joining Regional One Health in 2014, Abdullah was a Shareholder at Ogletree, Deakins, Nash & Smoak and spent nearly a decade at Baker, Donelson, Bearman, Caldwell & Berkowitz. He earned his Juris Doctor degree from the University of Minnesota Law School and his B.A. from the University of Minnesota. Abdullah has previously served on the boards Bodine School and Pleasant View School. He is a member of Western District of Tennessee Board of Professional Responsibility; past president of the Ben F. Jones Chapter of the National Bar Association; past chair of the Memphis Bar Association Employment Law Section; and past chair of the

Adams oversees the logistical operations of the Clinic ensuring that they are executed in accordance with the organization’s missions and objectives. She previously served as Clinic Manager for seven years.  She has a B.S.Ed. in Education from Abilene Christian University and is a Board Certified Medical Practice Executive. Adams served as the 2019 President of the MidSouth Medical Group Management Association.

Alway is a tenured professor in the Departments of Physical Therapy and Physiology and the director of the Center for Muscle, Metabolism and Neuropathology in the Division of Rehabilitation Sciences in the College of Health Professions. Before coming to UTHSC, Alway was at West Virginia University School of Medicine, where he was professor and chair of Exercise Physiology, executive chairperson for the Department of Human Performance and Exercise Science, and senior assistant dean of Research and Graduate Studies. For more than 28 years, he has been funded by the National Institutes of Health and various foundations for research in cellular and molecular adaptations related to sarcopenia, and the effects of aging on relative to muscle loading, exercise, and disuse. He has authored or co-authored more than 130 peer-reviewed scientific papers, written chapters for nine textbooks and authored more than 400 lay publications in exercise and fitness journals.

Ambrose has served as Assistant Medical Center Director for the Department of Veterans Affairs (VA) Medical Center in Memphis since October 2017. He began his VA career in 2012 as the Assistant Chief of Environmental Management Service at Little Rock in 2016, Ambrose transferred to the Memphis VA Medical Center as the Chief of Environmental Management Service. While in this role, he also served as Acting Chief of Logistics and Acting Assistant Medical Center Director. A graduate of Park University with a Bachelor of Science degree in Management/Computer Information Systems and holds a master’s in Healthcare Administration from Bellevue University. In 2017, he was appointed to the Tennessee State Veterans Homes Board. He won the Leadership Stone Award in 2018. Ambrose is retired from the United States Marine Corps.

Anderson is the vice president of Mississippi operations for Baptist Memorial Health Care. In this role, he oversees operations for Baptist’s nine Mississippi hospitals. From March 2014 to May 2017, Anderson served as the president and CEO of Mississippi Baptist Health Systems, which included four hospitals in central Mississippi, numerous medical clinics and subsidiary organizations. Anderson has served as a health care system CEO since 1998 and as a health care executive since 1994. He began his professional career in 1986 at KPMG in Jackson, Mississippi, working with many of the hospitals in the state. He is a graduate of Mississippi State University and is a certified public accountant. He is a fellow in the American College of Healthcare Executives. He serves numerous professional and civic organizations, including on the boards