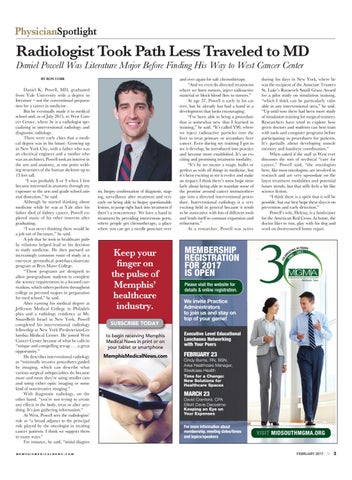 Daniel K. Powell, MD, graduated from Yale University with a degree in literature – not the conventional preparation for a career in medicine. But he eventually made it to medical school and, as of July 2015, to West Cancer Center, where he is a radiologist specializing in interventional radiology and diagnostic radiology. There were early clues that a medical degree was in his future. Growing up in New York City, with a father who was an electrical engineer and a mother who was an architect, Powell took an interest in the arts and anatomy, at one point welding structures of the human skeleton up to 13 feet tall. “I was probably 8 or 9 when I first became interested in anatomy through my exposure to the arts and grade school animal dissection,” he said. Although he started thinking about medicine while he was at Yale after his father died of kidney cancer, Powell explored many of his other interests after graduating. “I was never thinking there would be a job out of literature,” he said. A job that he took in healthcare public relations helped lead to his decision to study medicine. He then pursued an increasingly common route of study in a one-year premedical post-baccalaureate program at Bryn Mawr College. “Those programs are designed to allow post-graduate students to complete the science requirements in a focused curriculum, which others perform throughout college as pre-med majors in preparation for med school,” he said. After earning his medical degree at Jefferson Medical College in Philadelphia and a radiology residency at Mt. Sinai-Beth Israel in New York, Powell completed his interventional radiology fellowship at New York Presbyterian-Columbia Medical Center. He joined West Cancer Center because of what he calls its “unique and compelling set-up . . . a great opportunity.” He describes interventional radiology as “minimally invasive procedures guided by imaging, which can describe what various surgical subspecialties do because more and more they’re using smaller cuts and using either optic imaging or some kind of non-invasive imaging.” With diagnostic radiology, on the other hand, “you’re not trying to create any effects in the body, treat or alter anything. It’s just gathering information.” At West, Powell sees the radiologists’ role as “a broad adjunct to the principal role played by the oncologist in treating cancer patients. I think we support them in many ways.” For instance, he said, “initial diagnoMEMPHISMEDICALNEWS

sis, biopsy confirmation of diagnosis, staging, surveillance after treatment and very early on being able to biopsy questionable lesions, to jump right back into treatment if there’s a reoccurrence. We have a hand in treatment by providing intravenous ports, where people get chemotherapy, a place where you can get a needle puncture over

Keep your ﬁnger on the pulse of Memphis’ healthcare industry. SUBSCRIBE TODAY to begin receiving Memphis Medical News in print or on your tablet or smartphone

and over again for safe chemotherapy. “And we even do directed treatments where we burn tumors, inject radioactive material or block blood flow to tumors.” At age 37, Powell is early in his career, but he already has had a hand in a development that looks encouraging. “I’ve been able to bring a procedure that is somewhat new that I learned in training,” he said. “It’s called Y90, where we inject radioactive particles into the liver to treat primary or secondary liver cancer. Even during my training I got to see it develop, be introduced into practice and become more established. It’s an exciting and promising treatment modality. “It’s by no means a magic bullet or perfect as with all things in medicine, but it’s been exciting to see it evolve and make an impact. I think there’s some hope similarly about being able to translate some of the promise around cancer immunotherapy into a directed interventional procedure. Interventional radiology is a very exciting field in general because it tends to be innovative with lots of different tools and lends itself to constant expansion and refinement.” As a researcher, Powell was active

during his days in New York, where he was the recipient of the Associate Trustees St. Luke’s Roosevelt Small Grant Award for a pilot study on simulation training, “which I think can be particularly valuable in any interventional area,” he said. “Up until now there had been more study of simulation training for surgical trainees. Researchers have tried to explore how green doctors and students can best train with tools and computer programs before participating in procedures for patients. It’s partially about developing muscle memory and hand-eye coordination.” When asked if the staff at West ever discusses the sort of mythical “cure for cancer,” Powell said, “the oncologists here, like most oncologists, are involved in research and are very up-to-date on the latest treatment modalities and potential future trends, but that stills feels a bit like science fiction. “I think there is a spirit that it will be possible, but our best hope these days is on prevention and early detection.” Powell’s wife, Helena, is a fund-raiser for the American Red Cross. At home, the doctor likes to run, play with his dog and work on do-it-yourself home repair.

We invite Practice Administrators to join us and stay on top of your game! Executive Level Educational Luncheons Networking with Your Peers

For more information about membership, meeting dates/times and topics/speakers