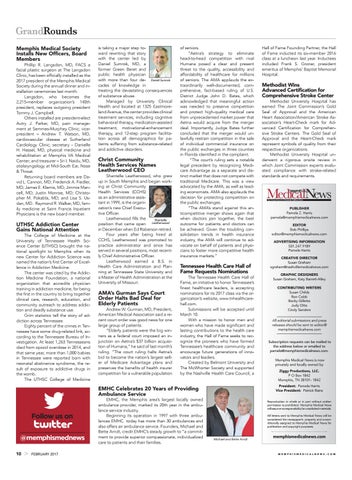 UTHSC Addiction Center Gains National Attention The College of Medicine at the University of Tennessee Health Science Center (UTHSC) brought the national spotlight to Memphis when its new Center for Addiction Science was named the nation’s first Center of Excellence in Addiction Medicine. The center was cited by the Addiction Medicine Foundation, a national organization that accredits physician training in addiction medicine, for being the first in the country to bring together clinical care, research, education, and community outreach to address addiction and deadly substance use. Grim statistics tell the story of addiction across Tennessee. Eighty percent of the crimes in Tennessee have some drug-related link, according to the Tennessee Bureau of Investigation. At least 1,263 Tennesseans died from opioid overdose in 2014, and that same year, more than 1,000 babies in Tennessee were reported born with neonatal abstinence syndrome, the result of exposure to addictive drugs in the womb. The UTHSC College of Medicine

is taking a major step toward rewriting that story with the center led by Daniel Sumrok, MD, a former Green Beret and public health physician with more than four de- Daniel Sumrok cades of knowledge in treating the devastating consequences of substance abuse. Managed by University Clinical Health and located at 1325 Eastmoreland Avenue, the center provides clinical treatment services, including cognitive behavioral therapy, medication-assisted treatment, motivational-enhancement therapy, and 12-step program facilitation across all demographics for patients suffering from substance-related and addictive disorders.

of seniors. “Aetna’s strategy to eliminate head-to-head competition with rival Humana posed a clear and present threat to the quality, accessibility and affordability of healthcare for millions of seniors. The AMA applauds the extraordinarily well-documented, comprehensive, fact-based ruling of U.S. District Judge John D. Bates, which acknowledged that meaningful action was needed to preserve competition and protect high-quality medical care from unprecedented market power that Aetna would acquire from the merger deal. Importantly, Judge Bates further concluded that the merger would unlawfully restrain competition in the sale of individual commercial insurance on the public exchanges in three counties in Florida identified in the complaint. “The court’s ruling sets a notable legal precedent by recognizing Medicare Advantage as a separate and distinct market that does not compete with traditional Medicare. This was a view advocated by the AMA, as well as leading economists. AMA also applauds the decision for protecting competition on the public exchanges. “The AMA’s stand against this anticompetitive merger shows again that when doctors join together, the best outcome for patients and doctors can be achieved. Given the troubling consolidation trends in health insurance industry, the AMA will continue to advocate on behalf of patients and physicians to foster more competitive health insurance markets.”

Tennessee Health Care Hall of Fame Requests Nominations The Tennessee Health Care Hall of Fame, an initiative to honor Tennessee’s finest healthcare leaders, is accepting nominations for its 2017 class via the organization’s website, www.tnhealthcarehall.com. Submissions will be accepted until March 10. With a mission to honor men and women who have made significant and lasting contributions to the health care industry, the Hall of Fame seeks to recognize the pioneers who have formed Tennessee’s healthcare community and encourage future generations of innovators and leaders. Created by Belmont University and The McWhorter Society and supported by the Nashville Health Care Council, a