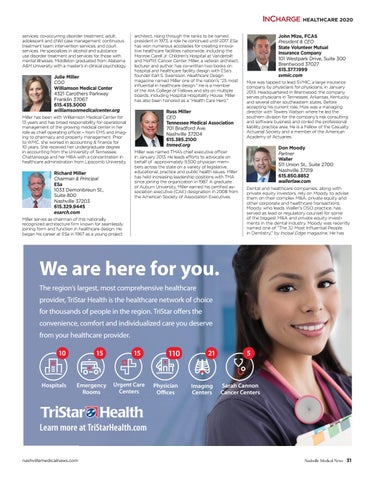 Julie Miller COO Williamson Medical Center 4321 Carothers Parkway Franklin 37067 615.435.5000 williamsonmedicalcenter.org Miller has been with Williamson Medical Center for 13 years and has broad responsibility for operational management of the growing medical center in her role as chief operating officer – from EMS and imaging to pharmacy and property management. Prior to WMC, she worked in accounting & finance for 10 years. She received her undergraduate degree in accounting from the University of Tennessee, Chattanooga and her MBA with a concentration in healthcare administration from Lipscomb University.

architect, rising through the ranks to be named president in 1973, a role he continued until 2017. ESa has won numerous accolades for creating innovative healthcare facilities nationwide, including the Monroe Carell Jr. Children’s Hospital at Vanderbilt and Moffitt Cancer Center. Miller, a veteran architect, lecturer and author, has co-written two books on hospital and healthcare facility design with ESa’s founder Earl S. Swensson. Healthcare Design magazine named Miller one of the nation’s “25 most influential in healthcare design.” He is a member of the AIA College of Fellows and sits on multiple boards, including Hospital Hospitality House. Miller has also been honored as a “Health Care Hero.”

Russ Miller CEO Tennessee Medical Association 701 Bradford Ave. Nashville 37204 615.385.2100 tnmed.org Miller was named TMA’s chief executive officer in January 2013. He leads efforts to advocate on behalf of approximately 9,500 physician members across the state on a variety of legislative, educational, practice and public health issues. Miller has held increasing leadership positions with TMA since joining the organization in 1987. A graduate of Auburn University, Miller earned his certified association executive (CAE) designation in 2008 from the American Society of Association Executives.

Miller serves as chairman of this nationally recognized architecture firm known for seamlessly joining form and function in healthcare design. He began his career at ESa in 1967 as a young project

John Mize, FCAS President & CEO State Volunteer Mutual Insurance Company 101 Westpark Drive, Suite 300 Brentwood 37027 615.377.1999 svmic.com Mize was tapped to lead SVMIC, a large insurance company by physicians for physicians, in January 2013. Headquartered in Brentwood, the company serves physicians in Tennessee, Arkansas, Kentucky and several other southeastern states. Before accepting his current role, Mize was a managing director with Towers Watson where he led the southern division for the company’s risk consulting and software business and co-led the professional liability practice area. He is a Fellow of the Casualty Actuarial Society and a member of the American Academy of Actuaries.

Don Moody Partner Waller 511 Union St., Suite 2700 Nashville 37219 615.850.8852 wallerlaw.com Dental and healthcare companies, along with private equity investors, rely on Moody to advise them on their complex M&A, private equity and other corporate and healthcare transactions. Moody, who leads Waller’s DSO practice, has served as lead or regulatory counsel for some of the biggest M&A and private equity investments in the dental industry. Moody was recently named one of “The 32 Most Influential People in Dentistry,” by Incisal Edge magazine. He has

We are here for you. The region’s largest, most comprehensive healthcare provider, TriStar Health is the healthcare network of choice for thousands of people in the region. TriStar offers the convenience, comfort and individualized care you deserve from your healthcare provider. 10