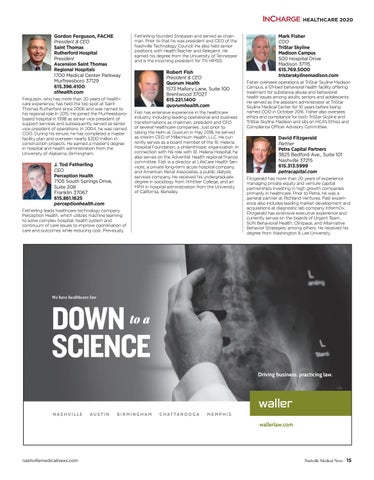 InCharge HEALTHCARE 2020 Gordon Ferguson, FACHE President & CEO Saint Thomas Rutherford Hospital President Ascension Saint Thomas Regional Hospitals 1700 Medical Center Parkway Murfreesboro 37129 615.396.4100 sthealth.com Ferguson, who has more than 20 years of healthcare experience, has held the top spot at Saint Thomas Rutherford since 2006 and was named to his regional role in 2015. He joined the Murfreesborobased hospital in 1998 as senior vice president of support services and subsequently served as senior vice president of operations. In 2004, he was named COO. During his tenure, he has completed a master facility plan and overseen nearly $300 million in construction projects. He earned a master’s degree in hospital and health administration from the University of Alabama, Birmingham.

Fetherling founded Stratasan and served as chairman. Prior to that he was president and CEO of the Nashville Technology Council. He also held senior positions with HealthTeacher and Relegent. He earned his degree from the University of Tennessee and is the incoming president for TN HIMSS.

Robert Fish President & CEO Quorum Health 1573 Mallory Lane, Suite 100 Brentwood 37027 615.221.1400 quorumhealth.com Fish has extensive experience in the healthcare industry, including leading operational and business transformations as chairman, president and CEO of several healthcare companies. Just prior to taking the helm at Quorum in May 2018, he served as interim CEO of Millennium Health, LLC. He currently serves as a board member of the St. Helena Hospital Foundation, a philanthropic organization. In connection with his role with St. Helena Hospital, he also serves on the Adventist Health regional finance committee. Fish is a director at LifeCare Health Services, a private long-term acute hospital company, and American Renal Associates, a public dialysis services company. He received his undergraduate degree in sociology from Whittier College, and an MPH in hospital administration from the University of California, Berkeley.

We have healthcare law

DOWN SCIENCE to a