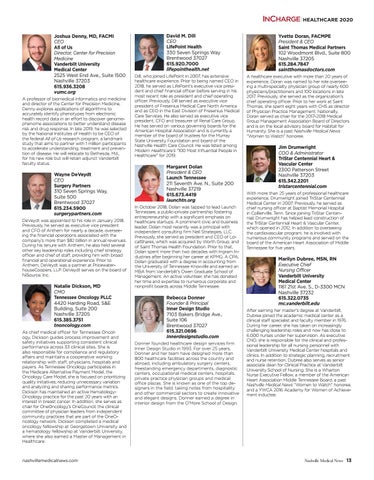 InCharge HEALTHCARE 2020 Joshua Denny, MD, FACMI CEO All of Us Director, Center for Precision Medicine Vanderbilt University Medical Center 2525 West End Ave., Suite 1500 Nashville 37203 615.936.3208 vumc.org A professor of biomedical informatics and medicine and director of the Center for Precision Medicine, Denny explores applications of algorithms to accurately identify phenotypes from electronic health record data in an effort to discover genomephenome associations to better understand disease risk and drug response. In late 2019, he was selected by the National Institutes of Health to be CEO of the federal All of Us research program, a landmark study that aims to partner with 1 million participants to accelerate understanding, treatment and prevention of disease. He will relocate to Bethesda, Md., for his new role but will retain adjunct Vanderbilt faculty status.

Wayne DeVeydt CEO Surgery Partners 310 Seven Springs Way, Suite 500 Brentwood 37027 615.234.5900 surgerypartners.com DeVeydt was appointed to his role in January 2018. Previously, he served as executive vice president and CFO of Anthem for nearly a decade, overseeing the financial operations associated with the company’s more than $82 billion in annual revenues. During his tenure with Anthem, he also held several other key leadership roles including chief strategy officer and chief of staff, providing him with broad financial and operational experience. Prior to Anthem, DeVeydt was a partner at PricewaterhouseCoopers, LLP. DeVeydt serves on the board of NiSource, Inc.

Natalie Dickson, MD CMO Tennessee Oncology PLLC 4420 Harding Road, S&E Building, Suite 200 Nashville 37205 615.385.3751 tnoncology.com As chief medical officer for Tennessee Oncology, Dickson guides process improvement and safety initiatives supporting consistent clinical performance across 33 clinical sites. She is also responsible for compliance and regulatory affairs and maintains a cooperative working relationship with staff, physicians, hospitals and payers. As Tennessee Oncology participates in the Medicare Alternative Payment Model, the Oncology Care Model, she is focused on prioritizing quality initiatives, reducing unnecessary variation and analyzing and sharing performance metrics. Dickson has maintained an active HematologyOncology practice for the past 20 years with an interest in breast cancer. In addition, she serves as chair for OneOncology’s OneCouncil, the clinical committee of physician leaders from independent community practices that are part of the OneOncology network. Dickson completed a medical oncology fellowship at Georgetown University and a hematology fellowship at Vanderbilt University, where she also earned a Master of Management in Healthcare.

David M. Dill CEO LifePoint Health 330 Seven Springs Way Brentwood 37027 615.920.7000 lifepointhealth.net Dill, who joined LifePoint in 2007, has extensive healthcare experience. Prior to being named CEO in 2018, he served as LifePoint’s executive vice president and chief financial officer before serving in his most recent role as president and chief operating officer. Previously, Dill served as executive vice president of Fresenius Medical Care North America and as CEO in the East Division of Fresenius Medical Care Services. He also served as executive vice president, CFO and treasurer of Renal Care Group. He has served on various governing boards for the American Hospital Association and is currently a member of the board of trustees for the Murray State University Foundation and board of the Nashville Health Care Council. He was listed among Modern Healthcare’s “100 Most Influential People in Healthcare” for 2019.

Margaret Dolan President & CEO Launch Tennessee 211 Seventh Ave. N., Suite 200 Nashville 37219 615.673.4419 launchtn.org In October 2018, Dolan was tapped to lead Launch Tennessee, a public-private partnership fostering entrepreneurship with a significant emphasis on healthcare startups. A prominent civic and business leader, Dolan most recently was a principal with independent consulting firm Neil Strategies, LLC. Previously, she served as president and CEO of LocalShares, which was acquired by Worth Group, and of Saint Thomas Health Foundation. Prior to that, Dolan spent more than two decades with Ingram Industries after beginning her career at KPMG. A CPA, Dolan graduated with a degree in accounting from the University of Tennessee Knoxville and earned an MBA from Vanderbilt’s Owen Graduate School of Management. An active volunteer, she has donated her time and expertise to numerous corporate and nonprofit boards across Middle Tennessee.

Yvette Doran, FACMPE President & CEO Saint Thomas Medical Partners 102 Woodmont Blvd., Suite 800 Nashville 37205 615.284.7847 saintthomasdoctors.com A healthcare executive with more than 20 years of experience, Doran was named to her role overseeing a multi-specialty physician group of nearly 600 physicians/practitioners and 100 locations in late 2017. Previously, she served as the organization’s chief operating officer. Prior to her work at Saint Thomas, she spent eight years with CHS as director of Physician Practice Management. Nationally, Doran served as chair for the 2017-2018 Medical Group Management Association Board of Directors and is on the local advisory board for Habitat for Humanity. She is a past Nashville Medical News “Women to Watch” honoree.

Marilyn Dubree, MSN, RN Executive Chief Nursing Officer Vanderbilt University Medical Center 1161 21st Ave. S., D-3300 MCN Nashville 37232 615.322.0735 mc.vanderbilt.edu After earning her master’s degree at Vanderbilt, Dubree joined the academic medical center as a clinical staff specialist and faculty member in 1976. During her career, she has taken on increasingly challenging leadership roles and now has close to 6,000 nurses under her supervision. As executive CNO, she is responsible for the clinical and professional leadership for all nursing personnel with Vanderbilt University Medical Center hospitals and clinics. In addition to strategic planning, recruitment and nurse retention, Dubree also serves as senior associate dean for Clinical Practice at Vanderbilt University School of Nursing. She is a Wharton Nurse Executive Fellow, a member of the American Heart Association Middle Tennessee Board, a past Nashville Medical News “Women to Watch” honoree, and a YWCA 2016 Academy for Women of Achievement inductee.