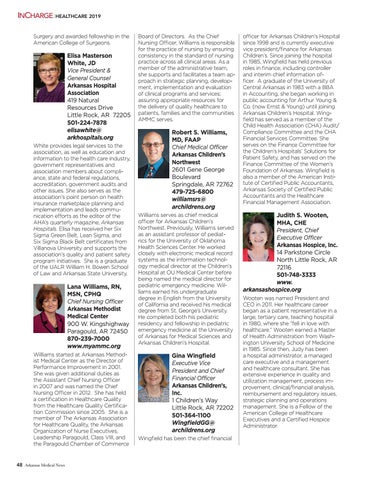 InCharge HEALTHCARE 2019 Surgery and awarded fellowship in the American College of Surgeons.

Board of Directors. As the Chief Nursing Officer, Williams is responsible for the practice of nursing by ensuring consistency in the standard of nursing practice across all clinical areas. As a member of the administrative team, she supports and facilitates a team approach in strategic planning, development, implementation and evaluation of clinical programs and services; assuring appropriate resources for the delivery of quality healthcare to patients, families and the communities AMMC serves.

Robert S. Williams, MD, FAAP Chief Medical Officer Arkansas Children’s Northwest 2601 Gene George Boulevard Springdale, AR 72762 479-725-6800 williamsrs@ archildrens.org Williams serves as chief medical officer for Arkansas Children’s Northwest. Previously, Williams served as an assistant professor of pediatrics for the University of Oklahoma Health Sciences Center. He worked closely with electronic medical record systems as the information technology medical director at the Children’s Hospital at OU Medical Center before being named the medical director for pediatric emergency medicine. Williams earned his undergraduate degree in English from the University of California and received his medical degree from St. George’s University. He completed both his pediatric residency and fellowship in pediatric emergency medicine at the University of Arkansas for Medical Sciences and Arkansas Children’s Hospital.

officer for Arkansas Children’s Hospital since 1998 and is currently executive vice president/finance for Arkansas Children’s. Since joining the hospital in 1985, Wingfield has held previous roles in finance, including controller and interim chief information officer.  A graduate of the University of Central Arkansas in 1983 with a BBA in Accounting, she began working in public accounting for Arthur Young & Co. (now Ernst & Young) until joining Arkansas Children’s Hospital. Wingfield has served as a member of the Child Health Association (CHA) Audit/ Compliance Committee and the CHA Financial Services Committee. She serves on the Finance Committee for the Children’s Hospitals’ Solutions for Patient Safety, and has served on the Finance Committee of the Women’s Foundation of Arkansas. Wingfield is also a member of the American Institute of Certified Public Accountants, Arkansas Society of Certified Public Accountants and the Healthcare Financial Management Association.

Judith S. Wooten, MHA, CHE President, Chief Executive Officer Arkansas Hospice, Inc. 14 Parkstone Circle North Little Rock, AR 72116 501-748-3333 www. arkansashospice.org Wooten was named President and CEO in 2011. Her healthcare career began as a patient representative in a large, tertiary care, teaching hospital in 1980, where she “fell in love with healthcare.” Wooten earned a Master of Health Administration from Washington University School of Medicine in 1985. Since then, Judy has been a hospital administrator, a managed care executive and a management and healthcare consultant. She has extensive experience in quality and utilization management, process improvement, clinical/financial analysis, reimbursement and regulatory issues, strategic planning and operations management. She is a Fellow of the American College of Healthcare Executives and a Certified Hospice Administrator.