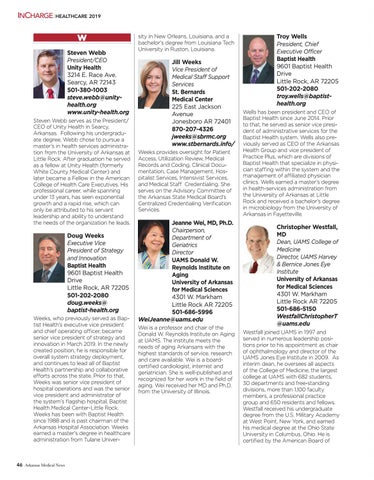 W Steven Webb President/CEO Unity Health 3214 E. Race Ave. Searcy, AR 72143 501-380-1003 steve.webb@unityhealth.org www.unity-health.org Steven Webb serves as the President/ CEO of Unity Health in Searcy, Arkansas. Following his undergraduate degree, Webb chose to pursue a master’s in health services administration from the University of Arkansas at Little Rock. After graduation he served as a fellow at Unity Health (formerly White County Medical Center) and later became a Fellow in the American College of Health Care Executives. His professional career, while spanning under 13 years, has seen exponential growth and a rapid rise, which can only be attributed to his servant leadership and ability to understand the needs of the organization he leads.

sity in New Orleans, Louisiana, and a bachelor’s degree from Louisiana Tech University in Ruston, Louisiana.

Jeanne Wei, MD, Ph.D. Chairperson, Department of Geriatrics Director UAMS Donald W. Reynolds Institute on Aging University of Arkansas for Medical Sciences 4301 W. Markham Little Rock AR 72205 501-686-5996 WeiJeanne@uams.edu Wei is a professor and chair of the Donald W. Reynolds Institute on Aging at UAMS. The institute meets the needs of aging Arkansans with the highest standards of service, research and care available. Wei is a boardcertified cardiologist, internist and geriatrician. She is well-published and recognized for her work in the field of aging. Wei received her MD and Ph.D. from the University of Illinois.

Troy Wells President, Chief Executive Officer Baptist Health 9601 Baptist Health Drive Little Rock, AR 72205 501-202-2080 troy.wells@baptisthealth.org Wells has been president and CEO of Baptist Health since June 2014. Prior to that, he served as senior vice president of administrative services for the Baptist Health system. Wells also previously served as CEO of the Arkansas Health Group and vice president of Practice Plus, which are divisions of Baptist Health that specialize in physician staffing within the system and the management of affiliated physician clinics. Wells earned a master’s degree in health-services administration from the University of Arkansas at Little Rock and received a bachelor’s degree in microbiology from the University of Arkansas in Fayetteville.

Christopher Westfall, MD Dean, UAMS College of Medicine Director, UAMS Harvey & Bernice Jones Eye Institute University of Arkansas for Medical Sciences 4301 W. Markham Little Rock AR 72205 501-686-5150 WestfallChristopherT @uams.edu Westfall joined UAMS in 1997 and served in numerous leadership positions prior to his appointment as chair of ophthalmology and director of the UAMS Jones Eye Institute in 2009. As interim dean, he oversees all aspects of the College of Medicine, the largest college at UAMS with 682 students, 30 departments and free-standing divisions, more than 1,100 faculty members, a professional practice group and 650 residents and fellows. Westfall received his undergraduate degree from the U.S. Military Academy at West Point, New York, and earned his medical degree at the Ohio State University in Columbus, Ohio. He is certified by the American Board of