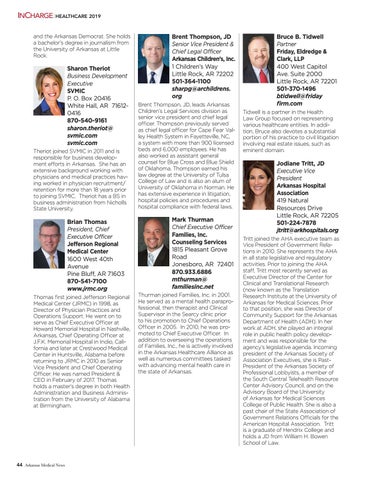 InCharge HEALTHCARE 2019 and the Arkansas Democrat. She holds a bachelor’s degree in journalism from the University of Arkansas at Little Rock.

Sharon Theriot Business Development Executive SVMIC P. O. Box 20416 White Hall, AR 716120416 870-540-9161 sharon.theriot@ svmic.com svmic.com Theriot joined SVMIC in 2011 and is responsible for business development efforts in Arkansas.  She has an extensive background working with physicians and medical practices having worked in physician recruitment/ retention for more than 18 years prior to joining SVMIC.  Theriot has a BS in business administration from Nicholls State University.

Mark Thurman Chief Executive Officer Families, Inc. Counseling Services 1815 Pleasant Grove Road Jonesboro, AR 72401 870.933.6886 mthurman@ familiesinc.net Thurman joined Families, Inc. in 2001. He served as a mental health paraprofessional, then therapist and Clinical Supervisor in the Searcy clinic prior to his promotion to Chief Operations Officer in 2005.  In 2010, he was promoted to Chief Executive Officer.  In addition to overseeing the operations of Families, Inc., he is actively involved in the Arkansas Healthcare Alliance as well as numerous committees tasked with advancing mental health care in the state of Arkansas.

Jodiane Tritt, JD Executive Vice President Arkansas Hospital Association 419 Natural Resources Drive Little Rock, AR 72205 501-224-7878 jtritt@arkhospitals.org Tritt joined the AHA executive team as Vice President of Government Relations in 2010. She represents the AHA in all state legislative and regulatory activities. Prior to joining the AHA staff, Tritt most recently served as Executive Director of the Center for Clinical and Translational Research (now known as the Translation Research Institute at the University of Arkansas for Medical Sciences. Prior to that position, she was Director of Community Support for the Arkansas Department of Health (ADH). In her work at ADH, she played an integral role in public health policy development and was responsible for the agency’s legislative agenda. Incoming president of the Arkansas Society of Association Executives, she is PastPresident of the Arkansas Society of Professional Lobbyists, a member of the South Central Telehealth Resource Center Advisory Council, and on the Advisory Board of the University of Arkansas for Medical Sciences College of Public Health. She is also a past chair of the State Association of Government Relations Officials for the American Hospital Association. Tritt is a graduate of Hendrix College and holds a JD from William H. Bowen School of Law.