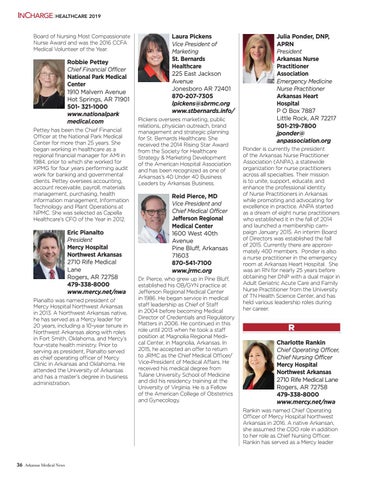 InCharge HEALTHCARE 2019 Board of Nursing Most Compassionate Nurse Award and was the 2016 CCFA Medical Volunteer of the Year.

Robbie Pettey Chief Financial Officer National Park Medical Center 1910 Malvern Avenue Hot Springs, AR 71901 501- 321-1000 www.nationalpark medical.com Pettey has been the Chief Financial Officer at the National Park Medical Center for more than 25 years. She began working in healthcare as a regional financial manager for AMI in 1984, prior to which she worked for KPMG for four years performing audit work for banking and governmental clients. Pettey oversees accounting, account receivable, payroll, materials management, purchasing, health information management, Information Technology and Plant Operations at NPMC. She was selected as Capella Healthcare’s CFO of the Year in 2012.

Reid Pierce, MD Vice President and Chief Medical Officer Jefferson Regional Medical Center 1600 West 40th Avenue Pine Bluff, Arkansas 71603 870-541-7100 www.jrmc.org Dr. Pierce, who grew up in Pine Bluff, established his OB/GYN practice at Jefferson Regional Medical Center in 1986. He began service in medical staff leadership as Chief of Staff in 2004 before becoming Medical Director of Credentials and Regulatory Matters in 2006. He continued in this role until 2013 when he took a staff position at Magnolia Regional Medical Center, in Magnolia, Arkansas. In 2015, he accepted an offer to return to JRMC as the Chief Medical Officer/ Vice-President of Medical Affairs. He received his medical degree from Tulane University School of Medicine and did his residency training at the University of Virginia. He is a Fellow of the American College of Obstetrics and Gynecology.