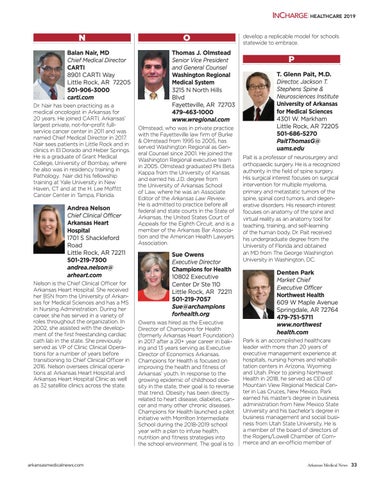 N Balan Nair, MD Chief Medical Director CARTI 8901 CARTI Way Little Rock, AR 72205 501-906-3000 carti.com Dr. Nair has been practicing as a medical oncologist in Arkansas for 20 years. He joined CARTI, Arkansas’ largest private, not-for-profit fullservice cancer center in 2011 and was named Chief Medical Director in 2017. Nair sees patients in Little Rock and in clinics in El Dorado and Heber Springs. He is a graduate of Grant Medical College, University of Bombay, where he also was in residency training in Pathology. Nair did his fellowship training at Yale University in New Haven, CT and at the H. Lee Moffitt Cancer Center in Tampa, Florida.

O Thomas J. Olmstead Senior Vice President and General Counsel Washington Regional Medical System 3215 N North Hills Blvd Fayetteville, AR 72703 479-463-1000 www.wregional.com Olmstead, who was in private practice with the Fayetteville law firm of Burke & Olmstead from 1995 to 2005, has served Washington Regional as General Counsel since 2001. He joined the Washington Regional executive team in 2005. Olmstead graduated Phi Beta Kappa from the University of Kansas and earned his J.D. degree from the University of Arkansas School of Law, where he was an Associate Editor of the Arkansas Law Review. He is admitted to practice before all federal and state courts in the State of Arkansas, the United States Court of Appeals for the Eighth Circuit, and is a member of the Arkansas Bar Association and the American Health Lawyers Association.

develop a replicable model for schools statewide to embrace.

P T. Glenn Pait, M.D. Director, Jackson T. Stephens Spine & Neurosciences Institute University of Arkansas for Medical Sciences 4301 W. Markham Little Rock, AR 72205 501-686-5270 PaitThomasG@ uams.edu Pait is a professor of neurosurgery and orthopaedic surgery. He is a recognized authority in the field of spine surgery. His surgical interest focuses on surgical intervention for multiple myeloma, primary and metastatic tumors of the spine, spinal cord tumors, and degenerative disorders. His research interest focuses on anatomy of the spine and virtual reality as an anatomy tool for teaching, training, and self-learning of the human body. Dr. Pait received his undergraduate degree from the University of Florida and obtained an MD from The George Washington University in Washington, DC.

Denten Park Market Chief Executive Officer Northwest Health 609 W Maple Avenue Springdale, AR 72764 479-751-5711 www.northwest health.com Park is an accomplished healthcare leader with more than 20 years of executive management experience at hospitals, nursing homes and rehabilitation centers in Arizona, Wyoming and Utah. Prior to joining Northwest Health in 2018, he served as CEO of Mountain View Regional Medical Center in Las Cruces, New Mexico. Park earned his master’s degree in business administration from New Mexico State University and his bachelor’s degree in business management and social business from Utah State University. He is a member of the board of directors of the Rogers/Lowell Chamber of Commerce and an ex-officio member of