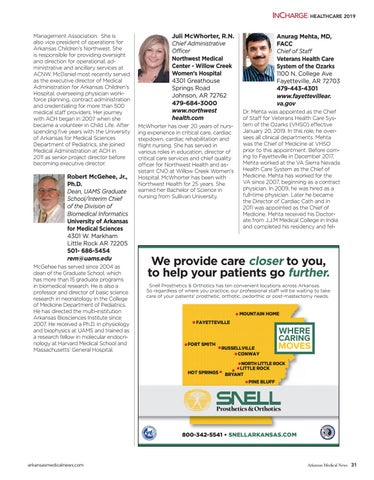 InCharge HEALTHCARE 2019 Management Association. She is also vice president of operations for Arkansas Children’s Northwest. She is responsible for providing oversight and direction for operational, administrative and ancillary services at ACNW. McDaniel most recently served as the executive director of Medical Administration for Arkansas Children’s Hospital, overseeing physician workforce planning, contract administration and credentialing for more than 500 medical staff providers. Her journey with ACH began in 2007 when she became a volunteer in Child Life. After spending five years with the University of Arkansas for Medical Sciences Department of Pediatrics, she joined Medical Administration at ACH in 2011 as senior project director before becoming executive director.

Robert McGehee, Jr., Ph.D. Dean, UAMS Graduate School/Interim Chief of the Division of Biomedical Informatics University of Arkansas for Medical Sciences 4301 W. Markham Little Rock AR 72205 501- 686-5454 rem@uams.edu McGehee has served since 2004 as dean of the Graduate School, which has more than 15 graduate programs in biomedical research. He is also a professor and director of basic science research in neonatology in the College of Medicine Department of Pediatrics. He has directed the multi-institution Arkansas Biosciences Institute since 2007. He received a Ph.D. in physiology and biophysics at UAMS and trained as a research fellow in molecular endocrinology at Harvard Medical School and Massachusetts’ General Hospital.

We provide care closer to you, to help your patients go further. Snell Prosthetics & Orthotics has ten convenient locations across Arkansas. So regardless of where you practice, our professional staff will be waiting to take care of your patients' prosthetic, orthotic, pedorthic or post-mastectomy needs.