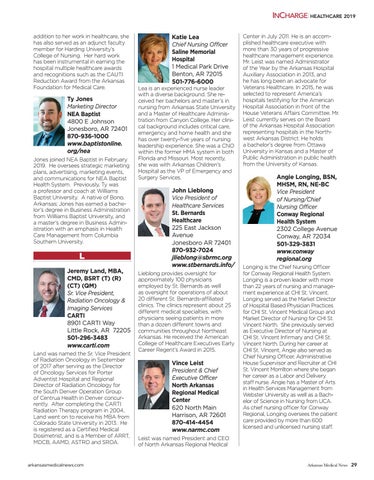 InCharge HEALTHCARE 2019 addition to her work in healthcare, she has also served as an adjunct faculty member for Harding University’s College of Nursing. Her hard work has been instrumental in earning the hospital multiple healthcare awards and recognitions such as the CAUTI Reduction Award from the Arkansas Foundation for Medical Care.

L Jeremy Land, MBA, CMD, BSRT (T) (R) (CT) (QM) Sr. Vice President, Radiation Oncology & Imaging Services CARTI 8901 CARTI Way Little Rock, AR 72205 501-296-3483 www.carti.com Land was named the Sr. Vice President of Radiation Oncology in September of 2017 after serving as the Director of Oncology Services for Porter Adventist Hospital and Regional Director of Radiation Oncology for the South Denver Operation Group of Centrua Health in Denver concurrently. After completing the CARTI Radiation Therapy program in 2004, Land went on to receive his MBA from Colorado State University in 2013. He is registered as a Certified Medical Dosimetrist, and is a Member of ARRT, MDCB, AAMD, ASTRO and SROA.

Lea is an experienced nurse leader with a diverse background. She received her bachelors and master’s in nursing from Arkansas State University and a Master of Healthcare Administration from Canyon College. Her clinical background includes critical care, emergency and home health and she has over twenty-five years of nursing leadership experience. She was a CNO within the former HMA system in both Florida and Missouri. Most recently, she was with Arkansas Children’s Hospital as the VP of Emergency and Surgery Services.

Center in July 2011. He is an accomplished healthcare executive with more than 30 years of progressive healthcare management experience. Mr. Leist was named Administrator of the Year by the Arkansas Hospital Auxiliary Association in 2013, and he has long been an advocate for Veterans Healthcare. In 2015, he was selected to represent America’s hospitals testifying for the American Hospital Association in front of the House Veterans Affairs Committee. Mr. Leist currently serves on the Board of the Arkansas Hospital Association representing hospitals in the Northwest Arkansas District. He holds a bachelor’s degree from Ottawa University in Kansas and a Master of Public Administration in public health from the University of Kansas.