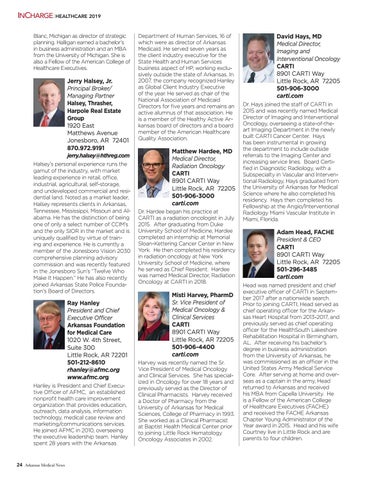 InCharge HEALTHCARE 2019 Blanc, Michigan as director of strategic planning. Halligan earned a bachelor’s in business administration and an MBA from the University of Michigan. She is also a Fellow of the American College of Healthcare Executives.

Halsey’s personal experience runs the gamut of the industry, with market leading experience in retail, office, industrial, agricultural, self-storage, and undeveloped commercial and residential land. Noted as a market leader, Halsey represents clients in Arkansas, Tennessee, Mississippi, Missouri and Alabama. He has the distinction of being one of only a select number of CCIM’s and the only SIOR in the market and is uniquely qualified by virtue of training and experience. He is currently a member of the Jonesboro Vision 2030 comprehensive planning advisory commission and was recently featured in the Jonesboro Sun’s “Twelve Who Make It Happen.” He has also recently joined Arkansas State Police Foundation’s Board of Directors.

Department of Human Services, 16 of which were as director of Arkansas Medicaid. He served seven years as the client industry executive for the State Health and Human Services business aspect of HP, working exclusively outside the state of Arkansas. In 2007, the company recognized Hanley as Global Client Industry Executive of the year. He served as chair of the National Association of Medicaid Directors for five years and remains an active alumnus of that association. He is a member of the Healthy Active Arkansas board of directors and a board member of the American Healthcare Quality Association.

Misti Harvey, PharmD Sr. Vice President of Medical Oncology & Clinical Services CARTI 8901 CARTI Way Little Rock, AR 72205 501-906-4400 carti.com Harvey was recently named the Sr. Vice President of Medical Oncology and Clinical Services. She has specialized in Oncology for over 18 years and previously served as the Director of Clinical Pharmacists.  Harvey received a Doctor of Pharmacy from the University of Arkansas for Medical Sciences, College of Pharmacy in 1993.  She worked as a Clinical Pharmacist at Baptist Health Medical Center prior to joining Little Rock Hematology Oncology Associates in 2002.

David Hays, MD Medical Director, Imaging and Interventional Oncology CARTI 8901 CARTI Way Little Rock, AR 72205 501-906-3000 carti.com Dr. Hays joined the staff of CARTI in 2015 and was recently named Medical Director of Imaging and Interventional Oncology, overseeing a state-of-theart Imaging Department in the newly built CARTI Cancer Center. Hays has been instrumental in growing the department to include outside referrals to the Imaging Center and increasing service lines. Board Certified in Diagnostic Radiology, with a Subspecialty in Vascular and Interventional Radiology, Hays graduated from the University of Arkansas for Medical Science where he also completed his residency. Hays then completed his Fellowship at the Angio/Interventional Radiology Miami Vascular Institute in Miami, Florida.

Adam Head, FACHE President & CEO CARTI 8901 CARTI Way Little Rock, AR 72205 501-296-3485 carti.com Head was named president and chief executive officer of CARTI in September 2017 after a nationwide search. Prior to joining CARTI, Head served as chief operating officer for the Arkansas Heart Hospital from 2013-2017, and previously served as chief operating officer for the HealthSouth Lakeshore Rehabilitation Hospital in Birmingham, AL. After receiving his bachelor’s degree in business administration from the University of Arkansas, he was commissioned as an officer in the United States Army Medical Service Core. After serving at home and overseas as a captain in the army, Head returned to Arkansas and received his MBA from Capella University. He is a Fellow of the American College of Healthcare Executives (FACHE) and received the FACHE Arkansas Chapter Young Administrator of the Year award in 2015. Head and his wife Courtney live in Little Rock and are parents to four children.