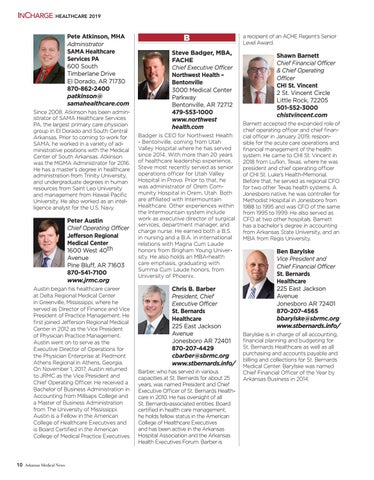 InCharge HEALTHCARE 2019 Pete Atkinson, MHA Administrator SAMA Healthcare Services PA 600 South Timberlane Drive El Dorado, AR 71730 870-862-2400 patkinson@ samahealthcare.com Since 2008, Atkinson has been administrator of SAMA Healthcare Services PA, the largest primary care physician group in El Dorado and South Central Arkansas. Prior to coming to work for SAMA, he worked in a variety of administrative positions with the Medical Center of South Arkansas. Atkinson was the MGMA Administrator for 2016. He has a master’s degree in healthcare administration from Trinity University, and undergraduate degrees in human resources from Saint Leo University and management from Hawaii Pacific University. He also worked as an intelligence analyst for the U.S. Navy.

Austin began his healthcare career at Delta Regional Medical Center in Greenville, Mississippi, where he served as Director of Finance and Vice President of Practice Management. He first joined Jefferson Regional Medical Center in 2012 as the Vice President of Physician Practice Management. Austin went on to serve as the Executive Director of Operations for the Physician Enterprise at Piedmont Athens Regional in Athens, Georgia. On November 1, 2017, Austin returned to JRMC as the Vice President and Chief Operating Officer. He received a Bachelor of Business Administration in Accounting from Millsaps College and a Master of Business Administration from The University of Mississippi. Austin is a Fellow in the American College of Healthcare Executives and is Board Certified in the American College of Medical Practice Executives.

Chris B. Barber President, Chief Executive Officer St. Bernards Healthcare 225 East Jackson Avenue Jonesboro AR 72401 870-207-4429 cbarber@sbrmc.org www.stbernards.info/ Barber, who has served in various capacities at St. Bernards for about 25 years, was named President and Chief Executive Officer of St. Bernards Healthcare in 2010. He has oversight of all St. Bernards-associated entities. Board certified in health care management, he holds fellow status in the American College of Healthcare Executives and has been active in the Arkansas Hospital Association and the Arkansas Health Executives Forum. Barber is

a recipient of an ACHE Regent’s Senior Level Award.

Shawn Barnett Chief Financial Officer & Chief Operating Officer CHI St. Vincent 2 St. Vincent Circle Little Rock, 72205 501-552-3000 chistvincent.com Barnett accepted the expanded role of chief operating officer and chief financial officer in January 2019, responsible for the acute care operations and financial management of the health system. He came to CHI St. Vincent in 2018 from Lufkin, Texas, where he was president and chief operating officer of CHI St. Luke’s Health-Memorial. Before that, he served as regional CFO for two other Texas health systems. A Jonesboro native, he was controller for Methodist Hospital in Jonesboro from 1988 to 1995 and was CFO of the same from 1995 to 1999. He also served as CFO at two other hospitals. Barnett has a bachelor’s degree in accounting from Arkansas State University, and an MBA from Regis University.