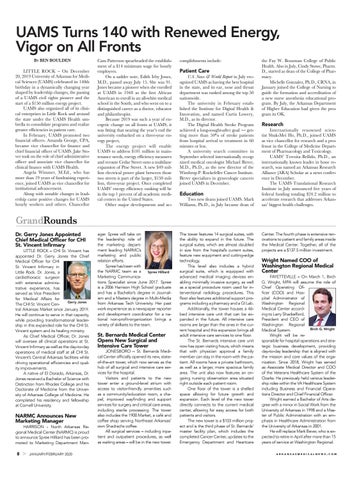 UAMS Turns 140 with Renewed Energy, Vigor on All Fronts By BEN BOULDEN

LITTLE ROCK – On December 20, 2019 University of Arkansas for Medical Sciences (UAMS) celebrated its 140th birthday in a dynamically changing year shaped by leadership changes, the passing of a UAMS civil rights pioneer and the start of a $150 million energy project. UAMS also organized all of its clinical enterprises in Little Rock and around the state under the UAMS Health umbrella to consolidate programs and realize greater efficiencies in patient care. In February, UAMS promoted two financial officers. Amanda George, CPA, became vice chancellor for finance and chief financial officer of UAMS. Jake Stover took on the role of chief administrative officer and associate vice chancellor for clinical finance with UAMS Health. Angela Wimmer, M.Ed., who has more than 19 years of fundraising experience, joined UAMS as vice chancellor for institutional advancement. Along with notable changes in leadership came positive changes for UAMS hourly workers and others. Chancellor

Cam Patterson spearheaded the establishment of a $14 minimum wage for hourly employees. On a sadder note, Edith Irby Jones, M.D., passed away July 15. She was 91. Jones became a pioneer when she enrolled at UAMS in 1948 as the first African American to enroll in an all-white medical school in the South, and who went on to a distinguished career as a doctor, educator and philanthropist. Because 2019 was such a year of energetic change on all fronts at UAMS, it was fitting that nearing the year’s end the university embarked on a three-year energy project, The  energy project  will enable UAMS to address $101 million in maintenance needs, energy efficiency measures and reroute Cedar Street onto a multilane expansion of Pine Street. A new $49 million electrical power plant between those two streets is part of the larger, $150 million, three-year project. Once completed UAMS’ energy efficiency ranking will be in the top 1 percent of all academic medical centers in the United States. Other major developments and ac-

ager. Spree will take on the leadership role of the marketing department leading NARMC’s marketing and public relation efforts. Spree has been with the NARMC team as a Spree Hilliard Marketing Communications Specialist since June 2017. Spree is a 2006 Harrison High School graduate and has a Bachelor’s degree in Journalism and a Masters degree in Multi-Media from Arkansas Tech University. Her past work experience as a newspaper reporter and development coordinator for a national non-profit-organization brings a variety of skillsets to the team.

The tower features 14 surgical suites, with the ability to expand in the future. The surgical suites, which are almost doubled in size from the hospital’s current suites, feature new equipment and cutting-edge technology. This level also includes a hybrid surgical suite, which is equipped with advanced medical imaging devices enabling minimally invasive surgery, as well as a special procedure room used for interventional radiology procedures. This floor also features additional support programs including a pharmacy and a GI Lab. Additionally, the tower houses a 46bed intensive care unit that can be expanded in the future. All intensive care rooms are larger than the ones in the current hospital and this expansion brings all adult intensive care services to one floor. The St. Bernards intensive care unit now has open visiting hours, which means that with physician approval a family member can stay in the room with the patient. All rooms have a private bathroom, as well as a larger, more spacious family area. The unit also now features an ongoing nursing observation area situated right outside each patient room. One floor of the tower is a shelled space allowing for future growth and expansion. Each level of the new tower directly connects to the current medical center, allowing for easy access for both patients and visitors. The new tower is a $103 million project and is the third phase of St. Bernards’ master facility plan, which includes the completed Cancer Center, updates to the Emergency Department and Heartcare

U.S. News & World Report in July recognized UAMS as having the best hospital in the state, and its ear, nose and throat department was ranked among the top 50 nationwide. The university in February established the  Institute for Digital Health & Innovation, and named  Curtis Lowery, M.D., as its director. The Digital Health Stroke Program achieved a long-sought-after goal — getting more than 50% of stroke patients from hospital arrival to treatment in 60 minutes or less. A university search committee in September selected internationally recognized medical oncologist Michael Birrer, M.D., Ph.D., as the new director of the Winthrop P. Rockefeller Cancer Institute. Birrer specializes in gynecologic cancers joined UAMS in December.

the Fay W. Boozman College of Public Health. Also in July, Cindy Stowe, Pharm. D., started as dean of the College of Pharmacy. Michelle Gonzalez, Ph.D., CRNA, in January joined the College of Nursing to guide the formation and accreditation of a new nurse anesthesia educational program. By July, the Arkansas Department of Higher Education had given the program its OK.

St. Bernards Medical Center Opens New Surgical and Intensive Care Tower JONESBORO -- St. Bernards Medical Center officially opened its new, stateof-the-art tower, which now serves as the hub of all surgical and intensive care services for the hospital. Visitors and patients to the new tower enter a ground-level atrium with access to visitor-friendly amenities such as a community/education room, a chapel, improved wayfinding and support services for surgery and critical care areas, including sterile processing. The tower also includes the 1900 Market, a café and coffee shop serving Northeast Arkansas’ own Shadrachs coffee. All surgical services – including inpatient and outpatient procedures, as well as waiting areas – will be in the new tower.

Center. The fourth phase is extensive renovations to patient and family areas inside the Medical Center. Together, all of the projects are a $137.5 million investment.

Wright Named COO of Washington Regional Medical Center FAYETTEVILLE – On March 1, Birch G. Wright, MPA will assume the role of Chief Operating Officer (COO) and Hospital Administrator of Washington Regional Medical Center according to Larry Shackelford, President and CEO of Washington Regional Birch G. Wright Medical System. Wright will be responsible for hospital operations and strategic business development, providing day-to-day leadership that is aligned with the mission and core values of the organization. Since 2018, Wright has served as Associate Medical Director and COO of the Veterans Healthcare System of the Ozarks. He previously held various leadership roles within the VA Healthcare System including Business and Financial Operations Director and Chief Financial Officer. Wright earned a Bachelor of Arts degree with a minor in Social Work from the University of Arkansas in 1998 and a Master of Public Administration with an emphasis in Healthcare Administration from the University of Arkansas in 2001. He will replace Mark Bever, who is expected to retire in April after more than 15 years of service at Washington Regional. arkansasmedicalnews