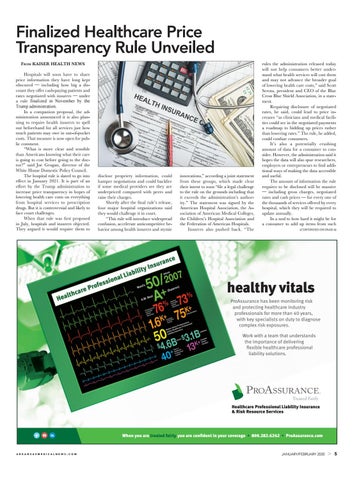 Hospitals will soon have to share price information they have long kept obscured — including how big a discount they offer cash-paying patients and rates negotiated with insurers — under a rule finalized in November by the Trump administration. In a companion proposal, the administration announced it is also planning to require health insurers to spell out beforehand for all services just how much patients may owe in out-of-pocket costs. That measure is now open for public comment. “What is more clear and sensible than Americans knowing what their care is going to cost before going to the doctor?” said Joe Grogan, director of the White House Domestic Policy Council. The hospital rule is slated to go into effect in January 2021. It is part of an effort by the Trump administration to increase price transparency in hopes of lowering health care costs on everything from hospital services to prescription drugs. But it is controversial and likely to face court challenges. When that rule was first proposed in July, hospitals and insurers objected. They argued it would require them to

disclose propriety information, could hamper negotiations and could backfire if some medical providers see they are underpriced compared with peers and raise their charges. Shortly after the final rule’s release, four major hospital organizations said they would challenge it in court. “This rule will introduce widespread confusion, accelerate anticompetitive behavior among health insurers and stymie

rules the administration released today will not help consumers better understand what health services will cost them and may not advance the broader goal of lowering health care costs,” said Scott Serota, president and CEO of the Blue Cross Blue Shield Association, in a statement. Requiring disclosure of negotiated rates, he said, could lead to price increases “as clinicians and medical facilities could see in the negotiated payments a roadmap to bidding up prices rather than lowering rates.” The rule, he added, could confuse consumers. It’s also a potentially crushing amount of data for a consumer to consider. However, the administration said it hopes the data will also spur researchers, employers or entrepreneurs to find additional ways of making the data accessible and useful. The amount of information the rule requires to be disclosed will be massive — including gross charges, negotiated rates and cash prices — for every one of the thousands of services offered by every hospital, which they will be required to update annually. In a nod to how hard it might be for a consumer to add up items from such

healthy vitals ProAssurance has been monitoring risk and protecting healthcare industry professionals for more than 40 years, with key specialists on duty to diagnose complex risk exposures. Work with a team that understands the importance of delivering flexible healthcare professional liability solutions.