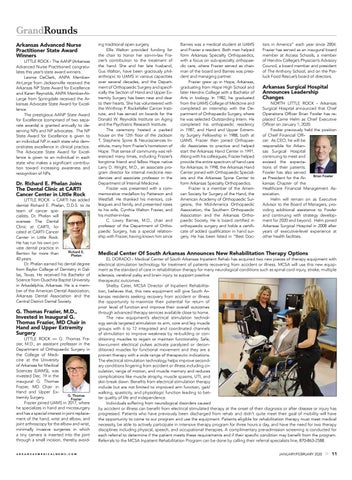 Dr. Richard E. Phelan Joins The Dental Clinic at CARTI Cancer Center in Little Rock LITTLE ROCK – CARTI has added dentist Richard E. Phelan, D.D.S. to its team of cancer specialists. Dr. Phelan will oversee The Dental Clinic at CARTI, located at CARTI Cancer Center in Little Rock. He has run his own private dental practice in Richard E. Benton for more than Phelan 40 years. Dr. Phelan earned his dental degree from Baylor College of Dentistry in Dallas, Texas. He received his Bachelor of Science from Ouachita Baptist University in Arkadelphia, Arkansas. He is a member of the American Dental Association, Arkansas Dental Association and the Central District Dental Society.

ing traditional open surgery. Ellis Walton provided funding for the chair to honor her son-in-law Frazier’s contribution to the treatment of the hand. She and her late husband, Gus Walton, have been graciously philanthropic to UAMS in various capacities over several decades, and the Department of Orthopaedic Surgery and specifically the Section of Hand and Upper Extremity Surgery has been near and dear to their hearts. She has volunteered with the Winthrop P. Rockefeller Cancer Institute, and has served on boards for the Donald W. Reynolds Institute on Aging and the Psychiatric Research Institute. The ceremony hosted a packed house on the 12th floor of the Jackson T. Stephens Spine & Neurosciences Institute, many from Frazier’s hometown of Hope. That sense of community was referenced many times, including Frazier’s longtime friend and fellow Hope native Larry D. Wright, M.D., an associate program director for internal medicine residencies and associate professor in the Department of Internal Medicine. Frazier was presented with a commemorative medallion by Patterson and Westfall. He thanked his mentors, colleagues and family, and presented roses to his wife, Cynthia Walton Frazier, and his mother-in-law. C. Lowry Barnes, M.D., chair and professor of the Department of Orthopaedic Surgery, has a special relationship with Frazier, having known him since

Barnes was a medical student at UAMS and Frazier a resident. Both men helped form Arkansas Specialty Orthopaedics, with a focus on sub-specialty orthopaedic care, where Frazier served as chairman of the board and Barnes was president and managing partner. Frazier grew up in Hope, Arkansas, graduating from Hope High School and later Hendrix College with a Bachelor of Arts in biology. In 1982, he graduated from the UAMS College of Medicine and completed an internship with the Department of Orthopaedic Surgery, where he was selected Outstanding Intern. He completed his orthopaedic residency in 1987, and Hand and Upper Extremity Surgery Fellowship in 1988, both at UAMS. Frazier then joined Orthopaedic Associates to practice and helped start the Arkansas Hand Center in 1991. Along with his colleagues, Frazier helped provide the entire spectrum of hand care for Arkansas. In 1998, the Arkansas Hand Center joined with Orthopaedic Specialists and the Arkansas Spine Center to form Arkansas Specialty Orthopaedics. Frazier is a member of the American Society for Surgery of the Hand, the American Academy of Orthopaedic Surgeons, the Mid-America Orthopaedic Association, the Southern Orthopaedic Association and the Arkansas Orthopaedic Society. He is board certified in orthopaedic surgery and holds a certificate of added qualification in hand surgery. He has been listed in “Best Doc-

tors in America” each year since 2004. Frazier has served as an inaugural board member at Access Schools, a member of Hendrix College’s Physician’s Advisory Council, a board member and president of The Anthony School, and on the Potluck Food Rescue’s board of directors.

Medical Center Of South Arkansas Announces New Rehabilitation Therapy Options EL DORADO - Medical Center of South Arkansas Inpatient Rehab has acquired two new pieces of therapy equipment with electrical stimulation technology for treatment of patients recovering from accident or illness. MCSA will use this new equipment as the standard of care in rehabilitation therapy for many neurological conditions such as spinal cord injury, stroke, multiple sclerosis, cerebral palsy and brain injury to support positive therapeutic outcomes. Shelby Cater, MCSA Director of Inpatient Rehabilitation, believes that, this new equipment will give South Arkansas residents seeking recovery from accident or illness the opportunity to maximize their potential for return of prior level of function and improve their overall outcomes through advanced therapy services available close to home. The new equipment’s electrical stimulation technology sends targeted stimulation to arm, core and leg muscle groups with 6 to 12 integrated and coordinated channels of stimulation to improve weakness by re-building or conditioning muscles to regain or maintain functionality. Safe, low-current electrical pulses activate paralyzed or deconditioned muscles for functional movement and they are a proven therapy with a wide range of therapeutic indications. The electrical stimulation technology helps improve secondary conditions lingering from accident or illness including circulation, range of motion, and muscle memory and reduces complications like muscle atrophy, muscle spasms, UTI, and skin break down. Benefits from electrical stimulation therapy include but are not limited to improved arm function, gait/ walking, spasticity, and physiologic function leading to better quality of life and independence. Individuals suffering from neurological disorders caused by accident or illness can benefit from electrical stimulated therapy at the onset of their diagnosis or after disease or injury has progressed. Patients who have previously been discharged from rehab and didn’t quite meet their goal of mobility will have the opportunity to come to our program and use the equipment. Patients eligible for rehabilitation therapy must meet medical necessity, be able to actively participate in intensive therapy program for three hours a day, and have the need for two therapy disciplines including physical, speech, and occupational therapies. A complimentary pre-admission screening is conducted for each referral to determine if the patient meets these requirements and if their specific condition may benefit from the program. Referrals to the MCSA Inpatient Rehabilitation Program can be done by calling their referral specialists line, 870-863-2588. JANUARY/FEBRUARY 2020