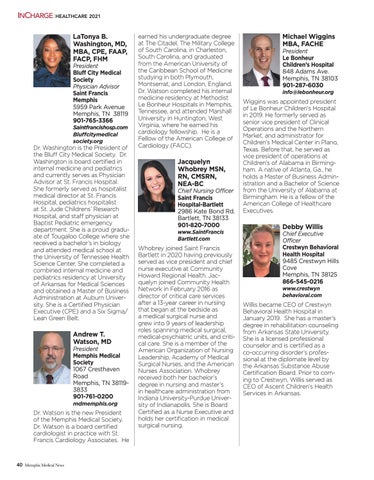 Dr. Washington is the President of the Bluff City Medical Society. Dr. Washington is board certified in internal medicine and pediatrics and currently serves as Physician Advisor at St. Francis Hospital. She formerly served as hospitalist medical director at St. Francis Hospital, pediatrics hospitalist at St. Jude Childrens’ Research Hospital, and staff physician at Baptist Pediatric emergency department. She is a proud graduate of Tougaloo College where she received a bachelor’s in biology and attended medical school at the University of Tennessee Health Science Center. She completed a combined internal medicine and pediatrics residency at University of Arkansas for Medical Sciences and obtained a Master of Business Administration at Auburn University. She is a Certified Physician Executive (CPE) and a Six Sigma/ Lean Green Belt.

Dr. Watson is the new President of the Memphis Medical Society. Dr. Watson is a board certified cardiologist in practice with St. Francis Cardiology Associates. He

earned his undergraduate degree at The Citadel, The Military College of South Carolina, in Charleston, South Carolina, and graduated from the American University of the Caribbean School of Medicine studying in both Plymouth, Montserrat, and London, England. Dr. Watson completed his internal medicine residency at Methodist Le Bonheur Hospitals in Memphis, Tennessee, and attended Marshall University in Huntington, West Virginia, where he earned his cardiology fellowship. He is a Fellow of the American College of Cardiology (FACC).

Whobrey joined Saint Francis Bartlett in 2020 having previously served as vice president and chief nurse executive at Community Howard Regional Health. Jacquelyn joined Community Health Network in February 2016 as director of critical care services after a 13-year career in nursing that began at the bedside as a medical surgical nurse and grew into 9 years of leadership roles spanning medical surgical, medical-psychiatric units, and critical care. She is a member of the American Organization of Nursing Leadership, Academy of Medical Surgical Nurses, and the American Nurses Association. Whobrey received both her bachelor’s degree in nursing and master’s in healthcare administration from Indiana University-Purdue University of Indianapolis. She is Board Certified as a Nurse Executive and holds her certification in medical surgical nursing.

Wiggins was appointed president of Le Bonheur Children’s Hospital in 2019. He formerly served as senior vice president of Clinical Operations and the Northern Market, and administrator for Children’s Medical Center in Plano, Texas. Before that, he served as vice president of operations at Children’s of Alabama in Birmingham. A native of Atlanta, Ga., he holds a Master of Business Administration and a Bachelor of Science from the University of Alabama at Birmingham. He is a fellow of the American College of Healthcare Executives.

Willis became CEO of Crestwyn Behavioral Health Hospital in January 2019. She has a master’s degree in rehabilitation counseling from Arkansas State University. She is a licensed professional counselor and is certified as a co-occurring disorder’s professional at the diplomate level by the Arkansas Substance Abuse Certification Board. Prior to coming to Crestwyn, Willis served as CEO of Ascent Children’s Health Services in Arkansas.