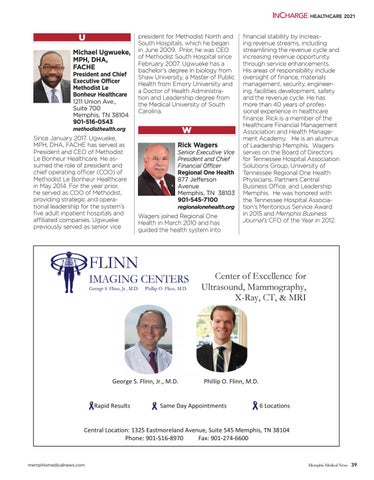 president for Methodist North and South Hospitals, which he began in June 2009. Prior, he was CEO of Methodist South Hospital since February 2007. Ugwueke has a bachelor’s degree in biology from Shaw University, a Master of Public Health from Emory University and a Doctor of Health Administration and Leadership degree from the Medical University of South Carolina.

financial stability by increasing revenue streams, including streamlining the revenue cycle and increasing revenue opportunity through service enhancements. His areas of responsibility include oversight of finance, materials management, security, engineering, facilities development, safety and the revenue cycle. He has more than 40 years of professional experience in healthcare finance. Rick is a member of the Healthcare Financial Management Association and Health Management Academy. He is an alumnus of Leadership Memphis. Wagers serves on the Board of Directors for Tennessee Hospital Association Solutions Group, University of Tennessee Regional One Health Physicians, Partners Central Business Office, and Leadership Memphis. He was honored with the Tennessee Hospital Association’s Meritorious Service Award in 2015 and Memphis Business Journal’s CFO of the Year in 2012.