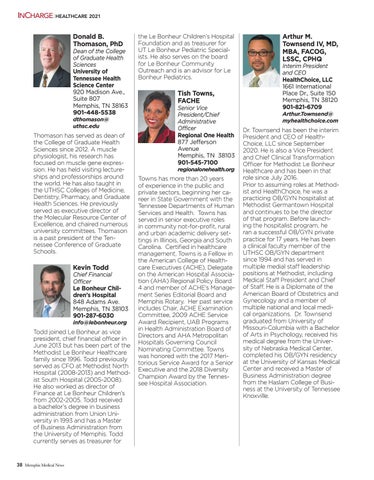 Thomason has served as dean of the College of Graduate Health Sciences since 2012. A muscle physiologist, his research has focused on muscle gene expression. He has held visiting lectureships and professorships around the world. He has also taught in the UTHSC Colleges of Medicine, Dentistry, Pharmacy, and Graduate Health Sciences. He previously served as executive director of the Molecular Resource Center of Excellence, and chaired numerous university committees. Thomason is a past president of the Tennessee Conference of Graduate Schools.

Todd joined Le Bonheur as vice president, chief financial officer in June 2013 but has been part of the Methodist Le Bonheur Healthcare family since 1996. Todd previously served as CFO at Methodist North Hospital (2008-2013) and Methodist South Hospital (2005-2008). He also worked as director of Finance at Le Bonheur Children’s from 2002-2005. Todd received a bachelor’s degree in business administration from Union University in 1993 and has a Master of Business Administration from the University of Memphis. Todd currently serves as treasurer for

Towns has more than 20 years of experience in the public and private sectors, beginning her career in State Government with the Tennessee Departments of Human Services and Health. Towns has served in senior executive roles in community not-for-profit, rural and urban academic delivery settings in Illinois, Georgia and South Carolina. Certified in healthcare management, Towns is a Fellow in the American College of Healthcare Executives (ACHE), Delegate on the American Hospital Association (AHA) Regional Policy Board 4 and member of ACHE’s Management Series Editorial Board and Memphis Rotary. Her past service includes Chair, ACHE Examination Committee, 2009 ACHE Service Award Recipient, UAB Programs in Health Administration Board of Directors and AHA Metropolitan Hospitals Governing Council Nominating Committee. Towns was honored with the 2017 Meritorious Service Award for a Senior Executive and the 2018 Diversity Champion Award by the Tennessee Hospital Association.

Dr. Townsend has been the interim President and CEO of HealthChoice, LLC since September 2020. He is also a Vice President and Chief Clinical Transformation Officer for Methodist Le Bonheur Healthcare and has been in that role since July 2016. Prior to assuming roles at Methodist and HealthChoice, he was a practicing OB/GYN hospitalist at Methodist Germantown Hospital and continues to be the director of that program. Before launching the hospitalist program, he ran a successful OB/GYN private practice for 17 years. He has been a clinical faculty member of the UTHSC OB/GYN department since 1994 and has served in multiple medial staff leadership positions at Methodist, including Medical Staff President and Chief of Staff. He is a Diplomate of the American Board of Obstetrics and Gynecology and a member of multiple national and local medical organizations. Dr. Townsend graduated from University of Missouri-Columbia with a Bachelor of Arts in Psychology, received his medical degree from the University of Nebraska Medical Center, completed his OB/GYN residency at the University of Kansas Medical Center and received a Master of Business Administration degree from the Haslam College of Business at the University of Tennessee Knoxville.