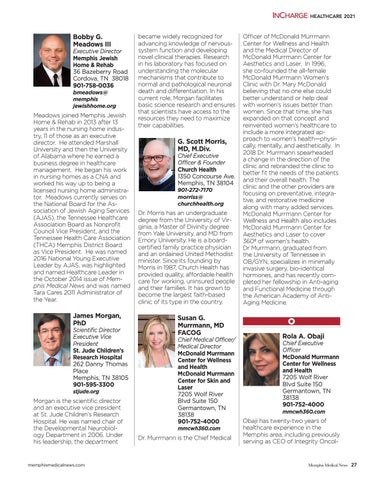 Meadows joined Memphis Jewish Home &amp; Rehab in 2013 after 13 years in the nursing home industry, 11 of those as an executive director. He attended Marshall University and then the University of Alabama where he earned a business degree in healthcare management. He began his work in nursing homes as a CNA and worked his way up to being a licensed nursing home administrator. Meadows currently serves on the National Board for the Association of Jewish Aging Services (AJAS), the Tennessee Healthcare Association Board as Nonprofit Council Vice President, and the Tennessee Health Care Association (THCA) Memphis District Board as Vice President. He was named 2016 National Young Executive Leader by AJAS, was highlighted and named Healthcare Leader in the October 2014 issue of Memphis Medical News and was named Tara Cares 2011 Administrator of the Year.

Morgan is the scientific director and an executive vice president at St. Jude Children’s Research Hospital. He was named chair of the Developmental Neurobiology Department in 2006. Under his leadership, the department

became widely recognized for advancing knowledge of nervoussystem function and developing novel clinical therapies. Research in his laboratory has focused on understanding the molecular mechanisms that contribute to normal and pathological neuronal death and differentiation. In his current role, Morgan facilitates basic science research and ensures that scientists have access to the resources they need to maximize their capabilities.

Officer of McDonald Murrmann Center for Wellness and Health and the Medical Director of McDonald Murrmann Center for Aesthetics and Laser. In 1996, she co-founded the all-female McDonald Murrmann Women’s Clinic with Dr. Mary McDonald believing that no one else could better understand or help deal with women’s issues better than women. Since that time, she has expanded on that concept and reinvented women’s healthcare to include a more integrated approach to women’s health—physiG. Scott Morris, cally, mentally, and aesthetically. In MD, M.Div. 2018 Dr. Murrmann spearheaded Chief Executive a change in the direction of the Officer &amp; Founder clinic and rebranded the clinic to Church Health better fit the needs of the patients 1350 Concourse Ave. and their overall health. The Memphis, TN 38104 clinic and the other providers are 901-272-7170 focusing on preventative, integramorriss@ tive, and restorative medicine churchhealth.org along with many added services. Dr. Morris has an undergraduate McDonald Murrmann Center for degree from the University of VirWellness and Health also includes ginia, a Master of Divinity degree McDonald Murrmann Center for from Yale University, and MD from Aesthetics and Laser to cover Emory University. He is a board360º of women’s health. certified family practice physician Dr Murrmann, graduated from and an ordained United Methodist the University of Tennessee in minister. Since its founding by OB/GYN, specializes in minimally Morris in 1987, Church Health has invasive surgery, bio-identical provided quality, affordable health hormones, and has recently comcare for working, uninsured people pleted her fellowship in Anti-aging and their families. It has grown to and Functional Medicine through become the largest faith-based the American Academy of Anticlinic of its type in the country. Aging Medicine.

Dr. Murrmann is the Chief Medical

Obaji has twenty-two years of healthcare experience in the Memphis area, including previously serving as CEO of Integrity Oncol-