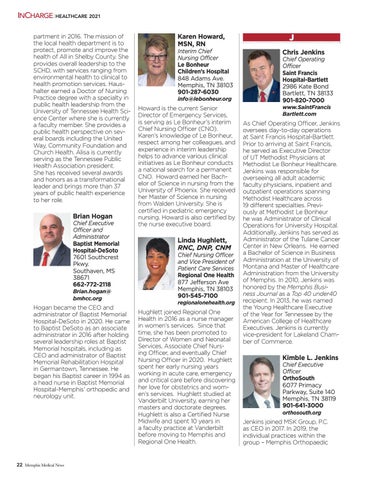 InCharge HEALTHCARE 2021 partment in 2016. The mission of the local health department is to protect, promote and improve the health of All in Shelby County. She provides overall leadership to the SCHD, with services ranging from environmental health to clinical to health promotion services. Haushalter earned a Doctor of Nursing Practice degree with a specialty in public health leadership from the University of Tennessee Health Science Center where she is currently a faculty member. She provides a public health perspective on several boards including the United Way, Community Foundation and Church Health. Alisa is currently serving as the Tennessee Public Health Association president. She has received several awards and honors as a transformational leader and brings more than 37 years of public health experience to her role.

Howard is the current Senior Director of Emergency Services, is serving as Le Bonheur’s interim Chief Nursing Officer (CNO). Karen’s knowledge of Le Bonheur, respect among her colleagues, and experience in interim leadership helps to advance various clinical initiatives as Le Bonheur conducts a national search for a permanent CNO. Howard earned her Bachelor of Science in nursing from the University of Phoenix. She received her Master of Science in nursing from Walden University. She is certified in pediatric emergency nursing. Howard is also certified by the nurse executive board.

Hughlett joined Regional One Health in 2016 as a nurse manager in women’s services. Since that time, she has been promoted to Director of Women and Neonatal Services, Associate Chief Nursing Officer, and eventually Chief Nursing Officer in 2020. Hughlett spent her early nursing years working in acute care, emergency and critical care before discovering her love for obstetrics and women’s services. Hughlett studied at Vanderbilt University, earning her masters and doctorate degrees. Hughlett is also a Certified Nurse Midwife and spent 10 years in a faculty practice at Vanderbilt before moving to Memphis and Regional One Health.

As Chief Operating Officer, Jenkins oversees day-to-day operations at Saint Francis Hospital-Bartlett. Prior to arriving at Saint Francis, he served as Executive Director of UT Methodist Physicians at Methodist Le Bonheur Healthcare. Jenkins was responsible for overseeing all adult academic faculty physicians, inpatient and outpatient operations spanning Methodist Healthcare across 19 different specialties. Previously at Methodist Le Bonheur he was Administrator of Clinical Operations for University Hospital. Additionally, Jenkins has served as Administrator of the Tulane Cancer Center in New Orleans. He earned a Bachelor of Science in Business Administration at the University of Montana and Master of Healthcare Administration from the University of Memphis. In 2010, Jenkins was honored by the Memphis Business Journal as a Top 40 under40 recipient. In 2013, he was named the Young Healthcare Executive of the Year for Tennessee by the American College of Healthcare Executives. Jenkins is currently vice-president for Lakeland Chamber of Commerce.

Jenkins joined MSK Group, P.C. as CEO in 2017. In 2019, the individual practices within the group – Memphis Orthopaedic